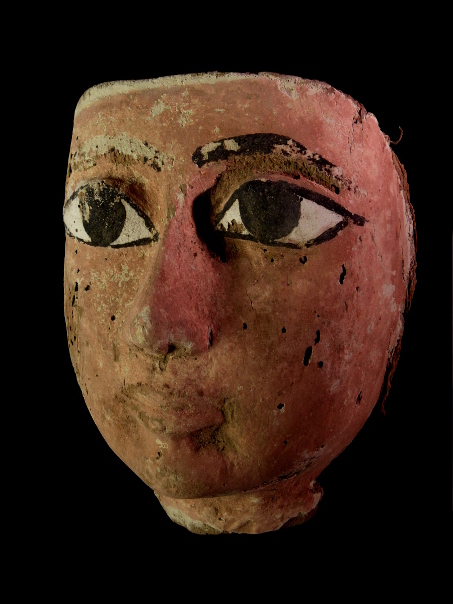 Description:
A small wood sarcophagus mask, with delicately carved details, making the face idealised and youthful. The mask has fleshy lips, a straight nose with small nostrils, and large and wide-open eyes. The mask still has its original paint, flesh-coloured for the face, white and black for the eyes ans black for the eyelids and eyebrows. Small fragments of cloth, once part of the mummy wrappings, are still adherent to the sides, and on the back holes and fragments of the pegs are visible, used to attach the mask to the sarcophagus.

The Egyptians have always tried to protect the body of a deceased person as much as possible, not only against any harm coming from outside but also because they believed that in the hereafter a person would continue his life as he had lived it while on earth, and therefore would need his body. In addition to this, they also wished to reproduce a life-like, recognisable mummy. This was important to make it possible for the ba (the aspect of freely moving around, often translated incorrectly as “soul”) of the deceased to recognise the body to which it belonged and to return to it to rest on it, transferring the energy of the sun which it had received after flying out of the tomb.

An unusually attractive mask, much nicer than most of these masks, which quite often are just ugly. This one has a "prettiness" that is rare to find.

Condition:
Some losses to the gesso layer as shown on the photographs, but with most of the original coulors remaining; age related damage to the wood; overall a very nice mask.