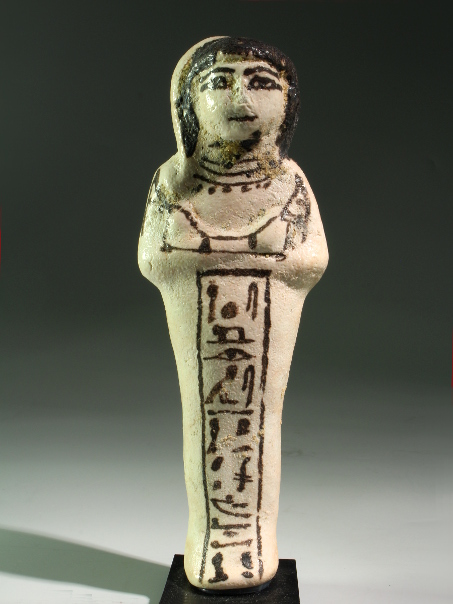 Description:
A shabti made of Egyptian white faience with details in black, for prince Maatptah. He is shown mummiform with only his hands and head protruding, wearing a short wig with sidelock, identifying him as sem priest, a title that was usually worn by the high priest of Ptah.

The figure holds the usual agricultural implements in his hands, and carries a seed bag on his back. He also wears a broad collar, consisting of several layers or strings.

The text on the shabti informs us about the titles and name of the owner: The illuminated one, the Osiris, the sem priest of Ptah, the son of the king, Maatenptah.

It is generally assumed that Maatptah was a son of Ramesses II, a prince whose full name was Ramesses-Maatptah; not much is known about this person.

For the name Maatptah (meaning “Justice of Ptah”) see Hermann Ranke, Die ägyptischen Personennamen, Band I (Glückstadt, 1935), p. 144, no. 26. A variant spelling with an indirect genitive has been used on several of his shabtis (Maatenptah), compare also similar names like Maatpuptah ("Ptah is Justice", Ranke I, p. 144, no. 25), or the alternative spellings of Maatdjehuty and Maatendjehuty ("Justice of Thoth", Ranke I, p. 145, no. 3).