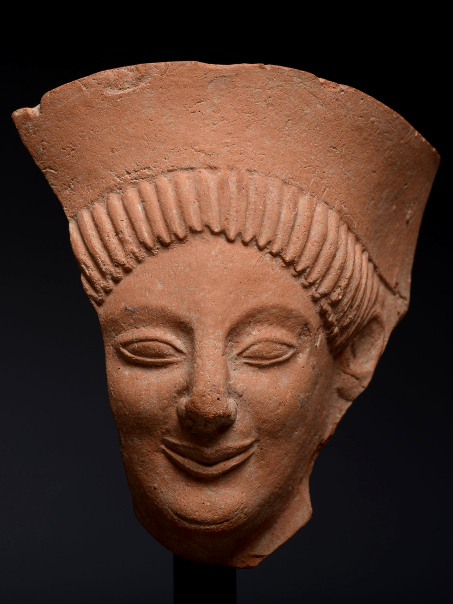 Description:
A lovely Greek terracotta fragment, depicting the face of a woman or more likely a goddess, who is smiling. This is the so-called "archaic smile" which is characteristic of the Archaic Period (circa 650 – 480 B.C.), more specifically the second quarter of the 6th century B.C. There have been several explanations for the smile; many think that for the Greeks it reflected a state of well-being, but technical reasons have also been suggested.

She has a long, oval face with high cheekbones, large almond-shaped bulging eyes, a prominent nose and a rounded chin. Her hair is gathered into neatly arranged pleats and is covered with a tall headband or crown, commonly called a stephane.

The fragment was possibly part of a protome (an adornment of pottery, sculpture or even architecture, in the shape of the upper part of a human being or an animal).

Size:
Height circa 9.5 cm, width circa 9 cm; height including stand circa 15 cm.

Provenance:
Estate of Lucie B. G., Basel, acquired before 1970; thereafter with ArtAncient, London.

Condition:
Fragment as shown, unrestored. Mounted on a custom made, removable stand.