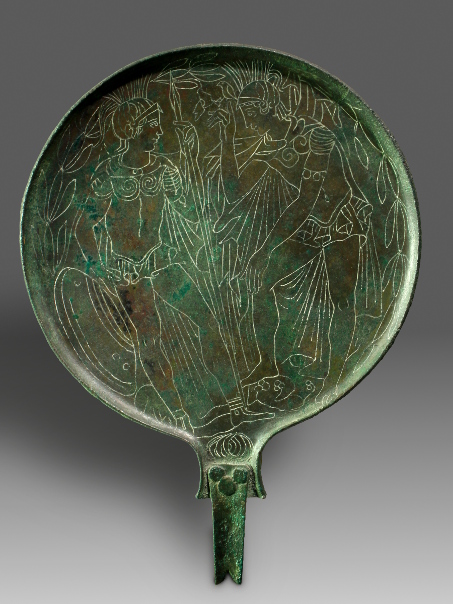 Description:
A large circular hand-mirror of the tanged type. Mirrors existed in various shapes: some of them were cast in one piece with the handle, whereas others only had a short tang which was inserted into a separately made handle of bone, ivory or wood. In this case the original tang has broken off, probably after a long period of using the mirror; some mirrors were used for generations. The tang has been replaced by a new one, which was attached by means of three rivets; this repair has been done in antiquity.

The mirror is slightly curved; the convex shape gives a reduced image, so a larger part of the user's face can be reflected than with a flat mirror. Well-polished bronze provides a good reflecting surface. On the obverse (the reflecting side) a palmette is incised on the base, near the tang. All around the rim is an ovolo motif, creating a beaded effect.

The reverse is decorated with an engraved scene, framed by a frieze of laurel leaves. Two hoplites are shown, who seem to be in conversation. Both are wearing a helmet, a cuirass decorated with spirals, and a chlamys (a cloak) which is tied around their neck, or possibly pinned with a fibula.

The soldier on the left holds a spear and a shield with circular decoration. The other soldier, standing on slightly uneven terrain, has put his right foot on a small mound, where vegetation is also shown. He appears to rest his left hand on his knee. His right hand is raised high, with his index finger pointing up, towards a small bird; it is also possible that the bird has just landed on his finger.

The meaning of this scene is yet to be investigated. It has been suggested that it may possibly be related to the practice of augury, interpreting omens and deciphering the will of the gods from the observed flight of birds. When the augur interpreted the signs, this was called "taking the auspex" in Roman religion (derived from the Latin words avis, bird, and specere, to look, to see). Depending on the birds, the auspices could be favorable or unfavorable (auspicious or inauspicious). As far as the scene on this mirror is concerned, it has been pointed out that both the raised leg and the pointing gesture belong to the "prophecy pose", used when someone is explaining a prophecy (see for example De Grummond, p. 36-37, figs. II.14, II.15).

Provenance:
French private collection of Julien Bessonneau (1842-1916), which was dissolved in the 1970s-1980s; thereafter collection of Yvette et Jacques Deschamps. Julien Bessonneau was a French industrialist and founder of the Établissements Bessonneau, a company for spinning, weaving and rope making. He was also involved in the early development of aviation in France, and became the mayor of his home town Saint-Clément-de-la-Place.

Condition:
Intact; the tang was broken and repaired in antiquity, riveted; two small and short cracks at the rim, hardly visible; with a smooth brown-green patina; the engraved lines were filled; an old label with inventory number on the tang. With a custom made stand.