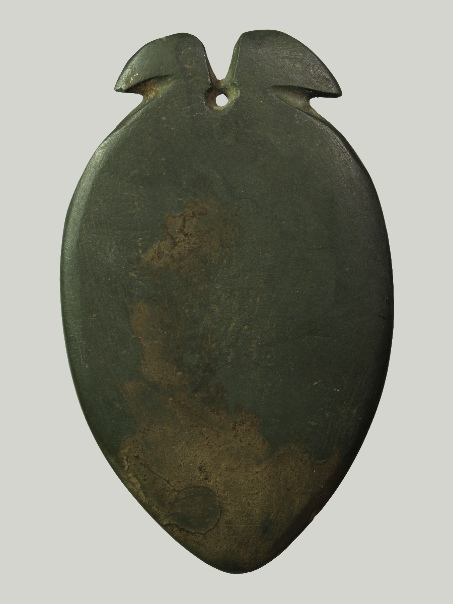 Description:
A small cosmetic palette, made of schist/graywacke, with the heads of two birds on top, a small hole centrally between them, presumably for suspension. Possibly such palettes were carried at a belt or on the chest, having a practical or magical function, but no representations of this are known, with one possible exception.

Predynastic Egyptians preferred one very specific stone for their palettes on which they would grind pigments, usually with a dark grey to greyish green colour. Once these flat stone objects were referred to as slates, but they were actually made almost exclusively from graywacke (siltstone/mudstone), originating principally in the Wadi Hammamat.

These palettes formed a solid base, hard enough to serve as a surface for grinding minerals when preparing make up. They are sometimes found together with lumps of ore, and with pebbles which were used to grind. The minerals used were preferably malachite (a green copper carbonate mineral, used as green eye-paint) and galena (used as grey-black eye-paint).

Naqada I palettes were all rhombus shaped, some only 5 centimeters in length, but other palettes were over 70 centimeters long. In the Naqada II period a variety of animal-shaped forms were introduced. Fish were a popular theme, as were birds; other animals were less frequently depicted (see Teeter, p. 70). By Naqada III they became ceremonial objects of display, their front and back surfaces carved with ritual scenes (ibid., p. 195).

The combination of two bird's heads is interesting. In the words of Diana Craig Patch (p. 40): "Birds were a favorite subject for palettes, in which they are often displayed as pairs, with their heads facing away from each other. The pairing of the birds could simply be a symmetrical arrangement of two animals or it could indicate that the duo is a mating pair. In late Old Kingdom reliefs animals in the process of giving birth are occasionally positioned facing away from each other. Another interpretation is that animal pairs in Predynastic iconography are an early representation of the concept of duality, widespread in ancient Egyptian culture. One of the creation myths in ancient Egyptian religious belief is that the creator god, Atum, established world order through pairs of gods. Echoing this mythology, the ancient Egyptians conceived of many aspects of their world as occurring in pairs that together made a whole: the desert and the valley, for example, or Upper and Lower Egypt. The greatest of these dualities was existence and nonexistence."