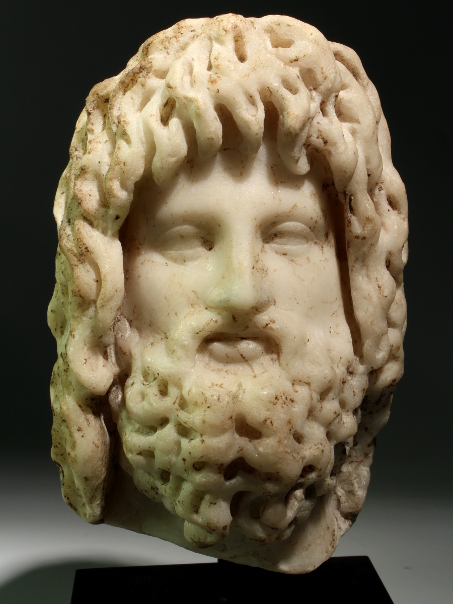 Description:
The god is shown with a thick beard and a long moustache. His face is framed by thick, wavy hair that is deeply drilled. He has almond-shaped, lidded eyes and a thin, pointed nose. Originally he was wearing a modius on top of his head.

This head is a Roman work of art; it was most likely derived from a famous colossal statue of Serapis in the temple at Alexandria. Usually this statue is said to have been created by the Athenian sculptor Bryaxis (4th century B.C.), one of the greatest artists of his time. However, as already pointed out by Michaelis (1885, p. 289-291), the Stoic philosopher Athenodorus from Tarsus, also known as Athenodorus Cananites (first century B.C., a teacher of Octavianus), mentioned that the Alexandrian statue of Sarapis may have been made by another artist also called Bryaxis, not by the Athenian sculptor.

Background information:
Sarapis (also called Serapis) was a syncretistic god who combined Egyptian and Hellenistic aspects. Based on the god Osiris and the bull Apis (which became Osir-Apis, in Greek Sarapis), the god was also identified with Asklepios (the god of healing), Dionysos and Hades.

Linked to Osiris Sarapis was a god of the earth, fertility and regeneration. But he had also solar aspects, being associated with Helios and Zeus, and becoming Lord of All, like the sun god in ancient Egypt; around 400 CE Macrobius wrote: "Evidence that the sun, under the name of Sarapis, is the object of all this reverence …" (Saturnalia I, 20, 13; translation P. Davies, 1968). Sarapis and Zeus were already identified in the Roman period, and coins show that Zeus Sarapis was honored as early as the reign of Vespasian (Roman emperor from 69–79 C.E.), and Achilles Tatius of Alexandria (second century C.E.) referred to "the great god, whom the Greeks call Zeus, and the Egyptians call Sarapis" (Leucippe et Clitophon V, 2, 1; see Stambaugh 1972, p. 83).

Together with his (in fact Osiris') consort Isis Sarapis was also seen as saviour ("Soter"), and he could be a healer. He also gave oracles and appeared in dreams and visions. The son of Sarapis and Isis was Horus, usually in the shape of Harpokrates.

The origins of the god Sarapis are much discussed. There are no known myths about the god. Therefore many believe that the cult was created in an artificial way by Ptolemaios (a general under Alexander the Great who later became king Ptolemaios I Soter I of Egypt). He is said to have introduced the god in an attempt to integrate the traditional Egyptian religion and the beliefs of the Greeks who lived in Egypt.

Authors from the ancient world (like Plutarchos) inform us that in a dream Ptolemaios saw a colossal statue of a god, the likes of which he had never seen before. This god commanded Ptolemaios to bring the statue from Sinope to Alexandria. Sinope was (as tradition has it) the Greek colony in Pontos on the Black Sea, but Egyptologists have also argued that it is short for Sinopeion, another name of the Serapeum, which already existed in Egypt.

The inhabitants of Sinope were reluctant to let the statue go, and it took three years before the statue was on its way (after either long negotiations or a wait of three years, depending on which tradition one follows); finally the statue boarded a ship on its own (or, as others state, was stolen by Ptolemaios).

Yet another tradition is rendered by the Roman historian Tacitus, who says that Sarapis was already known in Egypt; he was the god of Rhakotis (a small village, before it expanded into Alexandria).

There were several cult centres for Sarapis. The Greek author Pausanias (second century C.E.) wrote: "Of the Egyptian sanctuaries of Serapis the most famous is in Alexandria, the oldest in Memphis. Into this neither a stranger or a priest may enter until they bury the Apis" (Description of Greece, 1, XVIII, 4).

The temple in Alexandria, known as the Serapeum, was probably near the so-called "column of Pompey"; it contained the cult statue by Bryaxis (see above). The temple here also housed an annex to the Library of Alexandria, which was founded by Ptolemaios I and augmented by Ptolemaios II Philadelphus. This annex reputedly contained more than forty-two thousand scrolls.

The other cult centre mentioned by Pausanias was in Saqqara, the necropolis of Memphis, were the Apis bulls were buried (each Apis after his death became an Osiris: "Osir-Apis").

Sarapis was also worshipped elsewhere in Egypt, and in other parts of the Graeco-Roman world, such as the Greek island Delos and of course Rome (Collis Quirinalis, Campus Martius, Villa Hadriani). His presence has even been proved in Roman England.

Depictions of the god show him in anthropomorphic form, never mummiform (which illustrates that he is not the same as Osiris) but always as a Greek god with a full beard and wearing a robe in Greek style. Often he has a kalathos or modius on his head, which is a basket or measure for grain, symbolizing fertility of the earth and linking him with Osiris. Sometimes Sarapis is holding a sceptre. The multi-headed dog Cerberus, guarding the gates of Hades, can sometimes be seen resting at his feet (the animal was also associated with Anubis). On occasion Sarapis (usually together with his consort Isis) can be depicted as a snake with a human head.

Condition:
The marble displaying some natural impurities; the modius at the top of the head broken away in antiquity; small part of the nose restored (a few mm only), else intact; mounted.