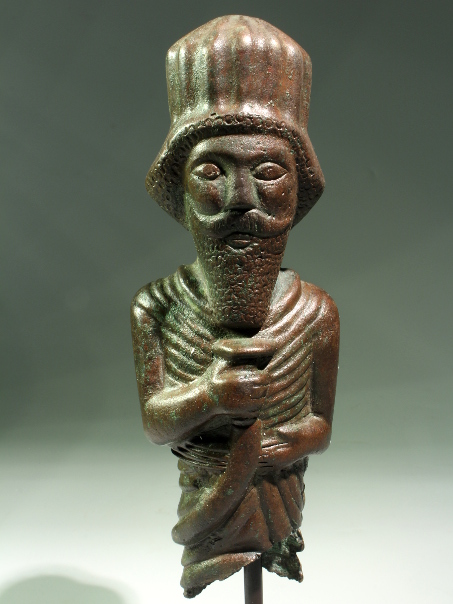 Description:
An important and heavy hollow cast figure, depicting a king or a noble. He is wearing a ribbed helmet in the shape of a high dome. His pleated garments are tied around his waist with a belt which consists of five horizontal parts. His long and full beard is tightly curled, as is his hair which appears from underneath the helmet. In his proper right hand he holds a curved sword.

There has been some discussion as to who the person depicted is. Some have pointed out that he probably is not a king since he lacks the crown and elaborate harness that was an emblem of Sasanian royalty. However, depictions of Sasanian kings wearing a similar domed helmet instead of a crown do exist. But even is he is not royal, he is undoubtedly an important person. It has been suggested that he could be a military leader or, alternatively, a warrior priest. These priests played an important role in the creation of the empire and had a close relationship with the soldiers, to the extent that state and religion were considered inseparable in Zoroastrian religion. It has even been said that without the relationship between warriors and priests, the empire would not have survived in its early stages (Daryaee, p. 45–51).

The Sasanian Empire (224-651 C.E.) started with the defeat of the Parthians by Ardashir I. He was a descendant of Sasan, a warrior as well as a Zoroastrian high priest, who gave his name to the new Sasanian dynasty. During the reign of Shapur I (241-272 C.E.) Zoroastrianism was made the state religion. By the end of his reign, the Sasanian empire stretched from the River Euphrates to the River Indus and included modern-day Armenia and Georgia. After a period during which much territory was lost, the Sasanian Empire regained its force during the reign of Shapur II (310-379 C.E.). In the fifth century, the Sasanians were forced to pay tribute to their neighbours, but the empire rose again during Khusrau I (531-579 C.E.). Soon afterwards there were internal revolts as well as wars with the Byzantine empire. Arab forces, united under Islam, defeated the Sasanian armies in 642. The last Sasanian ruler, Yazdgard III, died in 651.

Condition:
Lower part missing, however (as explained above) it is possible that this part never existed but that only the upper part of the body was created; in any case the existing part was roughly broken off from whatever was underneath, causing some damage to the underside and below the left arm; a small hole in the left side of the back of the neck; minuscule damage to the back of the helmet; all damage as shown on the photographs. The statuette has been cleaned to reveal the details, but it retains some scattered green surface patina on a rich brown surface.