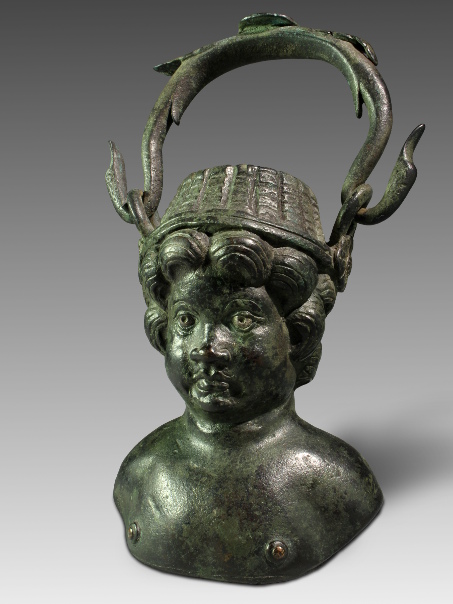 Description:
A very fine example of the class of cast Roman bronze perfume containers in the form of a young divinity or mortal. Some of these vessels depict gods like Hercules, Bacchus, or a satyr, others show Africans or athletes, and some are thought to be depictions of Antinous, Hadrian's favourite. In this case we have the bust of a naked young boy who is probably Cupid, wearing a straw hat.

The youthful god faces frontally. His face is round and has finely modelled features with fleshy lips and a rounded chin above a thick neck; his rather thick hair in wavy locks is parted in the center. His large, almond-shaped eyes are inlaid with silver with perforations for the pupils. His nipples are executed in copper.

The top of the hat has a fully functional hinged lid to prevent spilling. The container was provided with a swinging, omega-shaped handle, terminating in the heads of birds. The center of the handle is decorated with leaves and an ornamental rosette. To the sides of the hat are two loops for the handle, both also with a rosette.

It has been remarked that the straw hat is an exotic motif, which could point to the content of the container, possibly an oriental, fragrant essence. There is however some discussion about what such vessels might have contained. While many promote the idea that they served as a container for holding ointments or aromatic oils as used by athletes, it has also been put forward that they were suited for storing and dispensing cosmetic liquids and scented powdered substances. Lisa M. Anderson (Harvard Art Museums) follows Kitzinger (1967, p. 29) in suggesting that, due to issues that would arise in the extraction of oil, it is more likely that they held incense. For a discussion on the type of object and its potential uses, see Marti 1996 and 1999.

The object comes with a copy of the international export licence from the Austrian Ministry of Culture , as well as a metal analysis report.

Size:
Height of the container 10 cm; height including handle 14.5 cm.

Condition:
Minor damage to one of the side loops, part of the leaves decorating the handle slightly bent, very small hole in the back of the head, just below the hat, all as visible on the photographs; else intact.