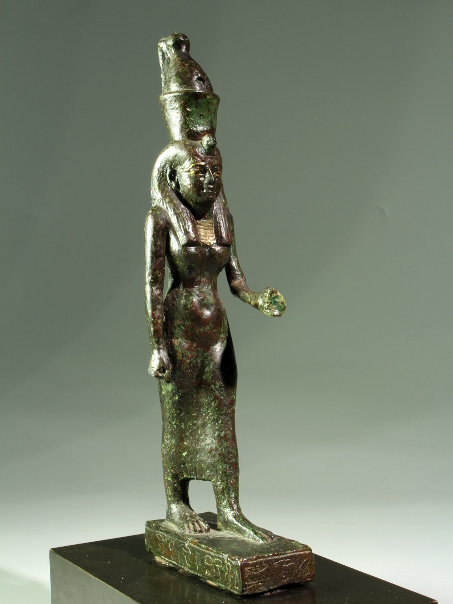 Description:
A bronze statuette depicting the Egyptian goddess Mut. She is shown in a striding position, her left foot forward. The goddess holds her right arm vertically against her side. Her left arm is bent at the elbow. Her clenched fists are pierced to hold the attributes with which the goddess is sometimes depicted, the was sceptre and the ankh symbol, both now missing. Mut is wearing a long, tight-fitting dress and has the double crown of Egypt on her head, with a protective uraeus in front.

Most strikingly, the eyes and eyebrows of the goddess were inlaid with gold; the collar is gold plated.

The statuette is standing on an rectangular integral base with carries a hieroglyphic inscription on all sides. The text mentions the name and filiation of the donor of the statuette, which are partly difficult to read: "O Mut, Eye of Re, Lady of the Sky, may life be given to Kha-Khonsu-iri-di-sw (?), the son of Ireru (?), born of the Lady of the house ... ".

Mut was the wife of Amun and the mother of Khonsu. Together they formed the triad of Thebes. Another aspect of her was that of a dangerous lioness, a role which she shared with Sekhmet, Wadjet, Tefnut and others. In this form she was often associated with the Eye of Re, which killed the enemies of the sun god by spitting fire, just like the uraeus snake on his brow did.

Condition:
Some encrustation, minor pitting and other surface wear, and minor surface damage as visible on the photographs; fragments of the gold inlay lost, especially from the left eyebrow; else intact. With a dark green and red patina. Mounted on a modern wood base.