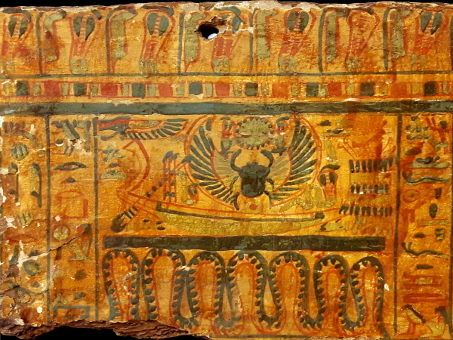 Description:
A large fragment of a polychrome panel from a sarcophagus. Above is a frieze of alternating cobras and feathers, separated from the scenes below by a band in various colours.

Below are three highly interesting but complex vignette-like scenes, some of them separated by columns of hieroglyphic texts.

The scene on the right shows the goddess Nut (as witnessed by her name, written below her feet). She has a feather on her head and is depicted in a tree. In her left hand she hold an ankh-sign (the sign of life) and with her raised right hand she seems to pour water from a vessel, which is received by a ba-bird sitting at a pond next to the tree. Next to the bird a male figure is presenting offerings to the goddess.

The second scene shows three gods, standing in the coils of a giant snake, within a shrine; the god in the middle is ram-headed and although he was identified in the 2001 publication of the panel as Khnum, it is more likely that this is one of the forms of Re, the ram’s head indicating that he is the ba of Osiris.

On the left a winged scarab, representing the morning sun, is sailing to the sky in a barque, which is identified as the morning barque by a swallow. The Egyptian word for scarab is related to the word for “coming into existence” (kheper). Below the scene a giant coiled snake.

Condition:
Fragment of a larger panel, with minor losses to the layer of stucco and paint as shown; professionally treated at the Allard Pierson Museum Amsterdam for better protection; mounted on a rectangular panel which allows the panel to hang on the wall.

Background information:
Right:
Nut is shown in a role usually taken up by Hathor, who was often identified, already in the Old Kingdom, as "Lady of the Sycamore" (Lesko, p. 83-84). However, other goddesses also appeared as, or within, a tree, such as Isis or, like on this panel, Nut.

The tree goddess, whatever her identity, is in fact the personification of the nourishment on which the deceased lives in the hereafter (Assmann, p. 129). This is clearly shown in a famous scene in the tomb of pharaoh Thothmes III: the tree goddess is suckling the king (see for example Lesko, p. 171, fig. 28); she is indicated as Isis, which was also related to the fact that the king's natural mother was called Isis and with the fact that the king personified the god Horus, whose mother was the goddess Isis.

Nut on the other hand, primarily the goddess of the sky who was believed to give birth to the sun (and the deceased) every morning, was often depicted on the lid of sarcophagi, so that she was litterally above the deceased; but since the deceased was born from her body, the whole sarcophagus was also referred to as Nut. And since most sarcophagi were made of wood, the Egyptians may have linked the goddess to the source of wood, i.e. the tree (Lesko, p. 43).

The sycamore tree was important in Egypt, because it is long-lived, grows large and has strong wood; it was the only native tree of useful size, and its wood was used for architectural purposes already in the Old Kingdom (Lesko, p. 84). The tree also played a role in the afterworld, both as a vital element in the landscape and related to food; in the Old Kingdom Pyramid Texts one can read: This Meryre will seize the two sycamores that are between (here and) the other side of the sky. They will ferry him and put him in yonder eastern side of the sky (Pyramid Texts, spell 507, Allen (2005), p. 176). Your sycamore is your grain, your grain is your sycamore (Pyramid Texts, spell 268, a metaphor for reversal, Allen (2005), p. 91, 96).

There was, however, a development. In the Pyramid Texts and Middle Kingdom Coffin Texts the tree goddess was a next-worldly figure. But in the New Kingdom the sycamore under which the deceased wished to rest, in the form of a ba, stood in a this-worldly garden. Numerous texts from this period express the wish that the ba-bird may alight under the tree or on its branches, sit in the shadow of the sycamore near a garden pool, and refresh itself by drinking water. In some tombs of the post-Amarna and Ramesside period the tree goddess is depicted, such as in the tomb of the vizier Paser (TT106), where she is called "Nut, the great, saving of power, in that name of hers 'sycamore'". And in the tomb of Amenemope (TT41) the tree goddess is addressed: Grant that my ba alight on your leaves, that it sits in your shadow, and that it drinks your water (Assmann, p. 224-225). Similarly in the tomb of the Royal Butler Djehuty (TT110): Transforming into a living ba, so as to alight on his grove and enjoy the shade of its sycamores (Ockinga, p. 21-22, and note 27 with a bibliography for scenes of the deceased drinking at his pool in the shade of a sycamore personified as a goddess).

From the Late Period a bronze libation vessel is known which shows Nut as a tree goddess, offering a libation to the deceased. The text reads: To be spoken by Nut: O Osiris N., take the libation from my arms. I am your mother and I bring you a vessel containing much water to satisfy your heart with libation (...) your body will live by means of the libation, it being rejuvenated (Assmann, p. 359; Rindi Nuzzolo, p. 465).

Middle:
Three gods are depicted within a shrine, the roof of which resembles the cover of a shabti box; all are standing in the coils of a giant snake. On the left we see Hapy, one of the children of Horus, mummiform with the head of a baboon, and on the right hand side his brother Duamutef is depicted, also mummiform, with a jackal’s head.

The god in the middle has the head of a ram, indicating that he is the ba of Osiris, the ram-headed nocturnal solar deity. Actually this is also a pun, because in Egyptian a ram is also called a ba (Richter p. 77).

In fact, as in other aspects, Re and Osiris complement each other. In the tomb of Nefertari in the Valley of the Queens one can see a representation of a mummy, standing upright, with the head of a ram; hieroglyphs identify him as Re. On his sides we see Isis and Nephthys as well as two texts which explain that it is "Osiris who rests in Re" and at the same time "this is Re who rests in Osiris" (see for example the illustration on the cover of Hornung 1999). A similar scene is found in several Theban tombs, such as TT 290, 335 and 336 (compare Darnell, p. 414-415).

Therefore, the ram-headed god who travels in the solar bark is both the “flesh” and the “ba” of Re, the mobile element that flies forth from the eastern horizon. In the transitional period of the ninth and tenth hours of the night, the ba that united with the corpse of Khepri in the sixth hour has yet to assume its manifestation of winged scarab (Manassa, p. 166).

Funerary compositions from the New Kingdom, such as the Amduat (the Book of the Hidden Chamber, "What is in the Netherworld") frequently depict and speak of the ram-headed god; he can be seen in the solar barque, under a central canopy which is formed of a protective serpent. The sun god transforms into his ram-headed form after reaching the threshold of the Netherworld: It is as a ram that this great god passes over them. As soon as he passes this gateway, he makes his transformation (Amduat, first hour; Manassa, p. 26; 201-203)

Left:
A winged scarab is sailing to the sky in a barque. This scarab is the morning sun, Khepri, the god who "comes into being" (which is what his name means). His name was written with the sign of a beetle (kheper in Egyptian). He is often depicted with wings. which allow him to fly to the sky.

In the Litany of Re (a funerary composition that invokes the 75 different names and forms of the sun god) a mummy with a winged scarab for a head is addressed with the words He of Khepri, embracing of wings (Manassa, p. 276), and in the Book of the Creation of the Solar Disk (also called the Book of Aker), the protrayal of the birth of Khepri is accompanied by the text Khepri, who is satisfied with his two wings (Manassa, p. 365).

On the prow of the barque a swallow is visible, another indication that this scene takes place at sunrise. The bird was considered the messenger of light and day, announcing the daily recreation of the world by the light, singing the victory of light over darkness. The animal is apt to be depicted in the sun-bark when its occupants are engaged in combat with the powers of darkness, the dreadful Apep snake (Te Velde, p. 26-27). It is possible that the coiled snake below represents Apep, the enemy of the sun god and the personification of everything that was a threat to the sunlight. The sun god and Apep were in constant battle, especially at the moment of sunrise.