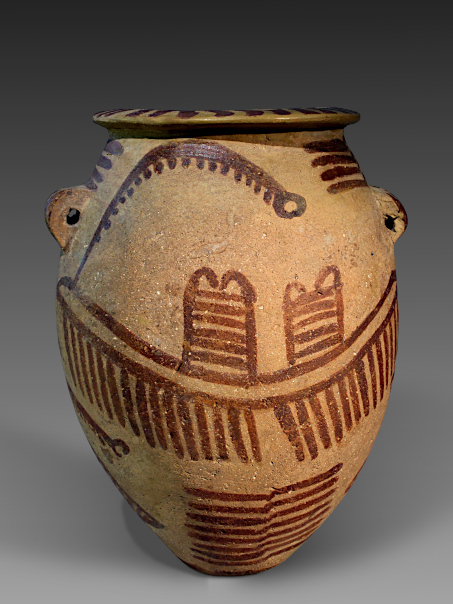 Description:
A marl pottery ovoid vase with two pierced lug handles for suspension. The vessel is decorated in red clay slip with two many-oared boats, each with a double cabin or portable shrine, with a gangway between them, and a branch in the prow. Both boats are travelling to the left. The boats are surrounded by several lines, representing the water of the river Nile (even on the bottom on the vase), as well as plants.

Dating:
Naqada II, circa 3500-3400 B.C. This vase belongs most likely to the early part of the Naqada II period; the facts that a boat is depicted without any humans, that a single branch is shown in the boat, and that no landscape is depicted (mountains, animals), all suggest an early date.

Provenance:
H.A.C. Kunst der Antike, Basel; thereafter collection of Prof. Hans Dahn (1919-2019), Lausanne, acquired from the above on 11 June 1953; thereafter with Cahn Basel, TEFAF Maastricht 2020. The object comes with a copy of the inventory card with description and the entry in the inventory list, both handwritten by Prof. Dahn.

Condition:
Intact, with some old restoration to the rim. Decoration very well preserved.

Background information:
Early in Naqada Il, marl clay (found only in a few desert locations) became an important component in the creation of Egyptian ceramics. When fired this clay turned a light red or buff colour, on which scenes were painted in dark red or red-brown (derived from a form of iron ore called hematite, see Patch, p. 223, note 114). Such vessels are usually referred to as Decorated Ware.

They were probably produced in only a few workshops, probably near the source of the clay (and then distributed widely from the Delta to Nubia), as a result of which the subjects on them and the execution are remarkably consistent.

The earliest examples of Decorated Ware mainly show spirals and zigzag lines, but soon boats and plants appeared also, usually with zigzags which presumably depict water (as does the later hieroglyph for water, a row of three zigzag lines).

Boats are the earliest and most common image on Decorated Ware specifically suggesting a river (as opposed to just water). These boats have multiple oars but lack any human figures (Patch, p. 67-68).

The boats as we know them from the Naqada II period images, with a cabin on the deck and multiple oars, seem to have reached a considerable stage of development. They are large and capable of carrying numerous people (compare Patch, p. 64-65). Yet there is a striking similarity to a boat that was depicted more than 3000 years earlier, discovered in central Sudan. In a layer which (through radiocarbon dating) was shown to date to the early seventh millennium B.C., a granite pebble was found with a partly preserved, black painted sketch of a boat. Only the back half of the boat is visible, including part of the hull, a steering system and a cabin at the centre of the upper hull. This is the oldest known representation of a Nile boat (see Usai - Salvatori, 2007).

It should also be pointed out that in the early days of Egyptology several scientists (Torr, Loret, Naville) believed that the depictions of what is now generally accepted to be a boat were in fact images of fortified towns. For the arguments against this opinion see already Edgerton (1923, p. 109 ff.) and Petrie (1920) p. 18.

Branches at the prow are depicted often. According to Petrie (1920, p. 18; cf. Petrie - Quibell (1895), p. 12 ; 48) this branch functioned as a shade for the look-out, whose seat is sometimes depicted below it. Others believe that the branch was put in the boat to catch the wind and provide capability for steering and tacking. It has also been pointed out that the palm branch (if it is a palm branch, but see below) symbolised long life (compare the palm branches in the hands of the god Heh, the personification of eternity). Petrie (1920, p. 19) gives a development of this branch in the boat, from a single branch in the early representations to a double or triple branch later.

The branch is similar to the one shown on a jar in the Metropolitan Museum of Art, New York (99.4.137, see Patch, p. 69, cat. 70), where it is shown not on a boat but as a growing plant; it is described as a short-stemmed, slender, droopy-leafed plant with a long central growth (Patch p. 68), or simply as the Naqadan plant (Graff 2016, p. 54-56). Several opinions exist as to what plant this is. Vandier (1952, p. 334-336) discusses the identification as an aloe; Brack and Zoller (Mitteilungen des Deutschen Archäologischen Instituts, Abteilung Kairo, Band 45 (1989), p. 33-53) discuss the possibility that it is a wild banana, see also Graff (2009), p. 64-65; 73). Patch (p. 69) mentions the possibility that it is a palm tree viewed from both above and the side, in which case the long spike would represent a stem holding dates (although if that were the case one would expect to see the dates), or a sedge (which in pharaonic times was a symbol of Upper Egypt).

Function:
Generally accepted is the view that vases decorated with boat scenes, because they have been found almost exclusively in burial contexts, may have served a ritual function, as processions by boat played an important role in the funerary iconography of Egypt throughout history; compare also the boat models that were included in tombs as part of the burial equipment from the late Naqada II period onwards (Patch, p. 64). In later periods, they often represent the journey of the deceased to the afterlife. It is not clear if the early scenes had the same significance, but if so certain ideas concerning the afterlife seem to have been established in Predynastic times already.

However, other suggestions for the role of the boat scenes have also been offered. The cabins for example have been explained as shrines for divinities (Hayes, p. 22), but they may also have had a more mundane function. Patch (p. 70) noted that scenes on such vessels as well as some of those in the Painted Tomb of Hierakonpolis and on the Gebelein painted linen (Late Naqada II; now in the Museo Egizio, Turin (S.17138); for a bibliography for these fragments see Patch, p. 246, cat. 25) may have been intended to revere a solar entity and to celebrate its role in the life and death of the ancient Egyptians.

Vanhulle (2018) has suggested that Predynastic and Early Dynastic images of boats and naval processions were used as a metaphor for the ordered social group, to express complex ideological concepts, the most important of them being the notion of “Order out of Chaos”. With the First Dynasty and the arrival of the king as ruler of Egypt and personification of ma’at, boats were no longer needed to express such notions, and from then on were mostly used in iconography and literature as a mere vehicle for common people or for gods and kings, although some texts show that it can still express metaphorical meanings. At the same time he admits that this hypothesis is very speculative for the decorated vases, as the iconography of these is considered to be of funerary and ceremonial nature.