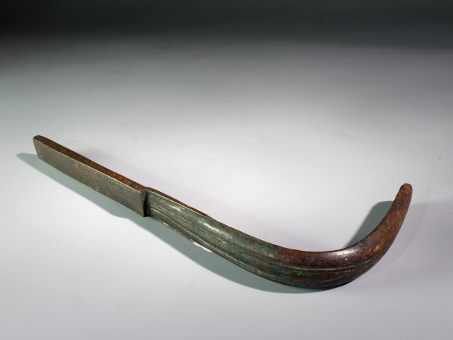 Description:
A strigil was a body scraper, used in antiquity to clean the body. Athletes would apply olive oil to their bodies before competing or exercising, which they did completely naked. Coating the bodies in oil was done to avoid dirt from getting into the pores of the skin, but possibly also to avoid sunburn. Afterwards they used strigils to scrape off the oil as well as the sand and dirt which had stuck to it during the contest. But not only athletes used strigils, everybody who wanted to clean his body could use one. Before the introduction of fat-based soaps in the late Empire, the cleansing medium was a mixture of low-grade olive oil and pumice. This was applied to the body and then scraped off by means of a strigil.

This strigil was nicely decorated. The inner side of the handle was chased with a series of figures that represent flowers, between two dotted borders and with other dots inbetween. The outside shows a long row of small circles, again between dotted borders. The curved part was decorated on the outside with a striated pattern in deep relief.

Condition:
In very good condition. A minuscule chip to one side of the scraper, circa 1 mm deep and 15 mm long, else completely intact and with a lovely brown patina.