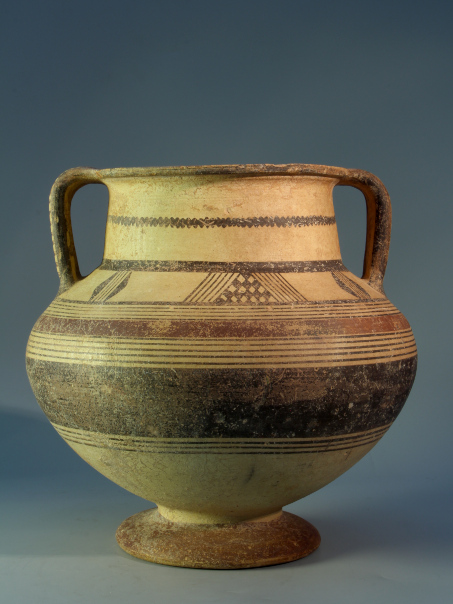 Description:
A large pottery amphora which has a depressed spherical body, set on a flaring base, and a short, wide and slightly concave cylindrical neck with everted narrow rim. Two triple reeded handles connect the shoulder of the vessel and the lip at right angles.

The vessel has a fine, precise decoration painted in umber and dark brown. The rim is decorated with groups of short strokes on the upper surface, and with one thick and four narrow bands on the interior. The neck shows a continuous, zigzagging band. On the shoulder we see a similar design on both sides, consisting of a chequerboard triangle in the middle, framed by five diagonal lines on either side, and two designs with three vertical lines framed by two depressed semicircles. The body is decorated with a series of horizontal concentric circles, most of them lines in three groups, bordering broader bands. The handles display a ladder pattern on the outer ridges, bordering an umber painted inner ridge.

Provenance:
Collection of Dr. Takey Crist, The Cyprus Museum of Jacksonville, North Carolina, USA, inventory number 108; thereafter with Charles Ede Ltd., London.
The Cyprus Museum was established by Dr. Takey Crist, who was Honorary Consul of Cyprus. The object is accompanied by two documents demonstrating that the collection was acquired legally with the full knowledge of the Cypriot Government: a) a notarized affidavit signed by Dr. Crist, declaring that all the antiquities displayed in the museum were legally acquired with the full knowledge of Cypriot authorities, and that during the time of their display, there were documented visits by Cypriot government dignitaries, and b) an official message of the President of the Republic of Cyprus, Mr. George Vassiliou, dated January 1990 and signed, expressing deep appreciation for the initiative of Dr. Crist and stating that the museum deserves full support.

Condition:
Intact with some encrustation and wear on the surface, minor chips to the rim, as shown. A museum inventory number "108" written underneath in ink.