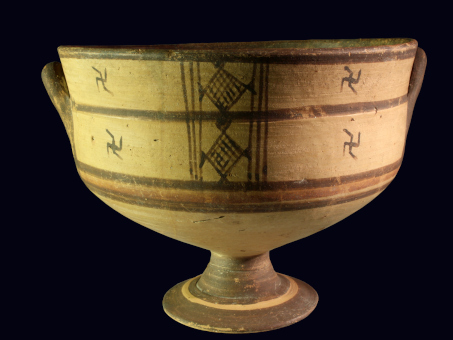 Description:
A terracotta stemmed bowl on a high flaring foot, with a body that is almost straight sided, the upper part slightly tapering and the lower part sharply tapering to the short, conical stem. It has two upward tilting loop handles.

On the white slip background a bichrome decoration is painted, using red and brownish black. The interior is decorated with some horizontal encircling bands, forming a target. The exterior shows a series of further encircling bands, dividing the main body in two registers. In the center of each register, on both sides, a cross-hatched diamond motif is visible, bordered by three vertical lines left and right. Between this motif and the handles the registers were decorated with paired swastikas.

The symbol is usually called a swastika (from ancient Sanskrit, meaning "associated with well-being"). It has been used for thousands of years in many cultures, where it had various positive meanings. It is known above all from Asia, but also from the Indo-European world; it was widely used in ancient Greek and Cypriot art; in Greek is has been called tetragammadion, because it was considered to be built from four Greek letters gamma (Γ) (tetra meaning "four" (from ancient Greek tettares), and gammadion referring to the letter gamma).

Provenance:
Collection of Dr. Takey Crist, The Cyprus Museum of Jacksonville, North Carolina, USA, inventory number 142; thereafter with Charles Ede Ltd., London.
The Cyprus Museum was established by Dr. Takey Crist, who was Honorary Consul of Cyprus. The object is accompanied by two documents demonstrating that the collection was acquired legally with the full knowledge of the Cypriot Government: a) a notarized affidavit signed by Dr. Crist, declaring that all the antiquities displayed in the museum were legally acquired with the full knowledge of Cypriot authorities, and that during the time of their display, there were documented visits by Cypriot government dignitaries, and b) an official message of the President of the Republic of Cyprus, Mr. George Vassiliou, dated January 1990 and signed, expressing deep appreciation for the initiative of Dr. Crist and stating that the museum deserves full support.

Condition:
Repaired from four large fragments; some surface wear, pitting and minor damage as shown; light wear to the paint. A museum inventory number "368 CY" written underneath in ink.