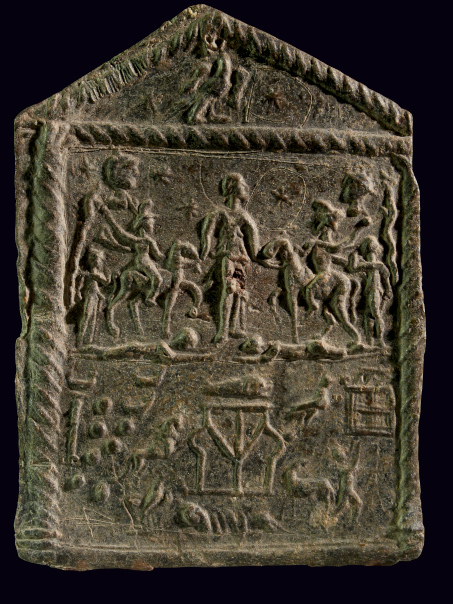 Description:
This is a so-called mystery plaque, cast in relief in the form of a temple. The lower part, depicting the interior of the sanctuary, has a twisted decoration on either side, framing the scene. This probably depicts fluted columns. The triangular gable (pediment) is delineated by three similar designs, mirroring he spiral fluting of the columns.

Within the pediment an eagle is visible between two stars.

Below, within the structure, we see two registers with a complex iconography of divine figures and symbols. Our knowledge of the mystery cult relies to a large extent on iconography.

The upper register contains two horsemen, thought by some to be the Dioscuri (i.e. Castor and Pollux), flanking a central figure who is appears to be feeding the horses. Behind the animals attendants are visible, with snakes behind their backs. A head, seen in profile, is depicted in the top left and right hand corners, and stars are shown in the background.

Below the horses two outstretched figures separate the scene from the lower register; possibly the horses are stepping on these figures, as seems to be shown on other cult plaques.

The lower register contains a scene with various animals, all around a central structure which might be either a container (some plaques depict a kantharos - symbol for water - with handles) or a table on which a fish is lying; on other plaques one can see here that men - possibly priests, because on many of these plaques they are depicted bold - are grouped around a table with a fish on it, which has been explained as possibly an offering meal. On the other hand the animal on the present plaque could also be a dolphin. Among the animals we see a bird (a symbol for the air), a lion (a symbol for fire) and possibly a snake (a symbol for the earth).

Condition:
Minor damage to the borders, some wear to the surface, particularly to a part of the twisted decoration of the gable; some scratches on both sides; otherwise well preserved. Comes with a custom made stand.