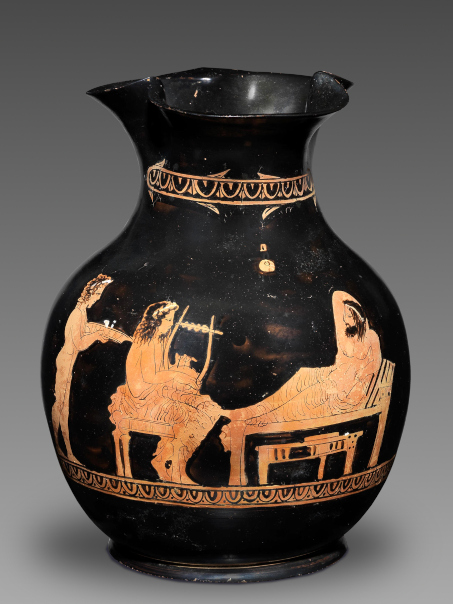 Description:
A very finely potted thin walled vessel with a trefoil lip and a ribbed handle. The body is decorated with a scene containing three figures.

On the right a partially draped figure is lying on a kline, leaning backwards against a striped cushion. He has a beard and has lifted his right arm, holding it over his head or possibly resting it on his head. In his other hand he is holding an object which has been explained as a kantharos, a cup for drinking wine. He is reclining next to a three-legged low dining table in the foreground, which appears to be empty but which will soon be filled with food brought by the young boy standing on the left.

This person is depicted nude and has his hair bound in an ivy wreath. Under his chin a goatee is visible, which was thought in the publication of the vase to be an error made by the painter, whereas others believe that this indicates that he may be a young satyr. He is holding a tray.

Between these two figures an Apollonian musician is depicted seated, playing a lyre. He is partly draped and has his long hair bound in an wreath of ivy.

An aryballos, a small, spherical container for anointing oil, is hanging in the field high above. The scene is framed by bands of dotted ovolo, the one above with acanthus leaves arranged axially symmetrically. It has been pointed out that the vase was decorated in the period when the Corinthian capital was first created, which was also decorated with acanthus leaves.

The scene on our vase is comparable to one illustrated in Van Hoorn (1951), p. 31; there a man is reclining on a large bed, his right arm raised and his left elbow resting on a striped cushion; a low table is standing next to him. A nude boy, carrying a tray with food, is appoaching from the left. Between the two figures a musician is playing a lyre, while sitting on the same bed as the man, her back towards him.

Background information:
The whole is a symposium scene; the reclining figure is probably Dionysos, but could also be a participant to the festival Anthesteria, with which our vase is probably connected. This was a flower festival, celebrated in February/March in honor of the god Dionysus. The festivities lasted three days, from the 11th to the 13th of the month Anthesterion, each of the days named after a type of vase (Pithoigia, Choes and Chytroi). On the second day the main events took place, including the hieros gamos of Dionysos. As the new wine was celebrated during the festival, there was also a drinking competition:

List, ye people! As was the custom of your forebears, empty a full pitcher of wine at the call of the trumpet; he, who first sees the bottom, shall get a wine-skin as round and plump as Ctesiphon's belly. (Aristophanes, Acharnians, line 1000)

Each participant was given his own jar of wine, and even boys, starting at the age of three when their names were entered into the records of the city, were given some wine in a miniature chous.

A chous served to take wine from a krater and pour it into a drinking cup. One did not drink directly from the chous (compare Plutarch, Quaestiones Convivales, 643a). Although the chous was known as an object used in daily life (see for example Aristophanes, Knights, line 95, 113), it especially became a vessel that was consecrated by religious tradition, being associated with the Anthesteria.

Condition:
Very finely potted, with thin walls, and in very good condition. The body of the vase appears to be intact, with no visible repair or restoration, just some small areas where losses to the black glaze were made good. Two small areas of restoration to the rim, affecting an area of 2.5 x 2 cm on the central part of the lip, with overpainting in these small areas. Minor cracking to the glaze and some pitting. Some encrustation on the underside of the foot. An old collection number written underneath, reading "51".