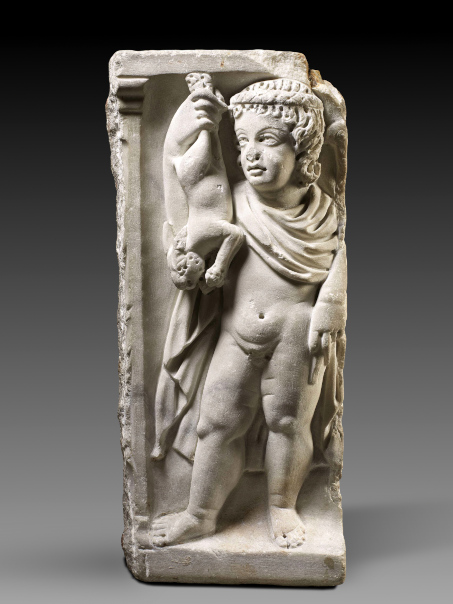 Description:
A large relief from a season sarcophagus depicting a young, chubby boy, who has a rather fleshy face with a dimpled chin. His lips are slightly parted, and in his deeply-drilled curling hair he wears a wreath. He is shown nude, apart from a long mantle which is tied over his shoulders and reaches the middle of the calf.

In his upraised right hand he holds a captured hare by its back legs. In his left hand the remains are visible of a pointed object. This has been described by previous owners as the lower end of a cornucopia (horn of plenty). More likely however is that this is a lagobolon, a throwing stick used by hunters to strike hares.

The boy is the personification of autumn; the hare is typical for depictions of autumn, as are fruits (Abura (2015), p. 231).

To the proper right of the boy a column is visible, and over his head part of the upper border of the sarcophagus is preserved.

Background information:
The representation of the seasons goes back to ancient Greece and has changed over time. Initially the Horai (goddesses of the seasons) were shown as the triad spring, summer and autumn, with their specific attributes. In the Hellenistic period winter was added. The development is probably related to the adoption of the solar calendar with four seasons and twelve months. In Roman times this was further developed and in late antiquity the representation of the seasons had become widespread, full-length or as busts, in sculpture, painting and mosaics. They are often seen on the four corners of floor mosaics or on sarcophagi. For season sarcophagi see Abura (2015), p. 229; McCann (1978), p. 94-106; 133-137; Hanfmann (1951); Koch (1993), p. 87-88; Koch - Sichtermann (1982), p. 217-223; Kranz (1984); Parrish (1995), p. 174); Zanker-Ewald (2004), p. 167-170.

For a comparable depiction of Autumn on a sarcophagus fragment, together with Summer, see the Museum of Fine Arts, Boston, acc. no. 58.584.

In Ovidius’ Metamorphoses, the famous Greek philosopher Pythagoras teaches the public, saying: Do you not see that the year displays four aspects in a semblance of our life? For spring, in its new life, is like a child. From spring, the year moves to summer, and becomes a powerful man. Autumn comes, when the ardour of youth has gone. Then trembling winter, with faltering steps, its hair despoiled, or, what it has, turned white. (P. Ovidius Naso, Metamorphoses, Book 15, in the translation by Anthony S. Kline (2000); omission of certain phrases by me). Therefore the seasons were thought to represent the cycle of life from birth to death.

As we have seen, the seasons were personified; generally they were represented as women, but on many monuments they are shown as children, often winged, carrying attributes related to the various seasons. Autumn, personified as Phthinoporon, can be seen carrying a basket of fruits or bunches of grapes, or a hare; this animal also symbolizes the abundance of the season.

The word lagobolon comes from the Greek , “hare” and , “to throw”. For the use of a lagobolon and depictions in ancient Greek art and later see also Nankov (2010); Nefedkin (2009).

Provenance:
Collection of Reinhold Hofstätter (1927-2013, art dealer in Vienna, Austria), acquired at the latest in the 1980s, and said to have been bought in France from the collection of an old French noble family, where is was part of the inventory of their castle; with Galerie Kunst der Antike, Vöcklabruck, Austria; with Rudolf Mahringer, Vienna; with Christoph Bacher Ancient Art, Vienna.

Condition:
Intact as preserved, with no visible repair or restoration. There is some expected overall damage, as shown, with minor chips and pitting, some light scratches and dirt encrustation, iron staining and discolouration. The proper top left corner is missing. The nose and phallus of the child and the proper left ear of the hare chipped. The back and sides are roughly hewn, with some red paint and remnants of plaster on both long sides. A metal prong is attached to the back which acts as a support so the relief can stand upright.