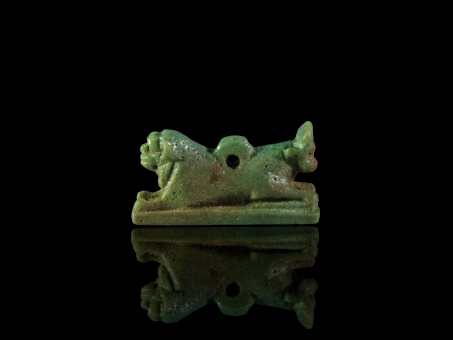 Description:
An extremely rare green glazed faience amulet depicting the conjoined foreparts of two recumbent animals, a lion and a bull, facing away from each other. The bull is shown with a solar disk between its horns. A ribbed suspension loop is located above, behind the heads of the animals, possibly intended to depict the rising sun. On an integral plinth.

The amulet evokes the more traditional image of Aker, two couchant lions, who according to a funerary text represented yesterday and tomorrow, and between who the sun would rise in the morning (often depicted between the animals as the sun disk, sometimes within the horizon). Aker is rarely seen as an amulet, but more often on funerary papyri (in particular a vignette accompanying spell 17 in the Book of the Dead) and on tomb walls, but also on one of the headrests of Tutankhamun, identifying the head resting on it, between the lions, with the rising sun.

Background information:
Aker is usually depicted as a flat sign (the hieroglyph for earth), terminating at both ends in the front part of a lion, often with a human head, like a sphinx. Aker was a personification of the earth, like Geb. As such the god had a positive side as well as a negative side, which generally was less stressed. He represented the feared realm of the dead in the dark earth, in which the deceased could be hindered when travelling; but at the same time, more importantly, it was from Aker that the dead would arise into the light of the day, exactly like the sun god, who journeyed through the earth each night; for this Aker would also help the deceased by protecting him against the snakes that live in the earth. Because of these functions, amulets in the shape of Aker were often given to the deceased.

Condition:
Intact with some wear; some minuscule holes caused by air bubbles during firing, especially under the base; minimal encrustation and discoloration, as shown.