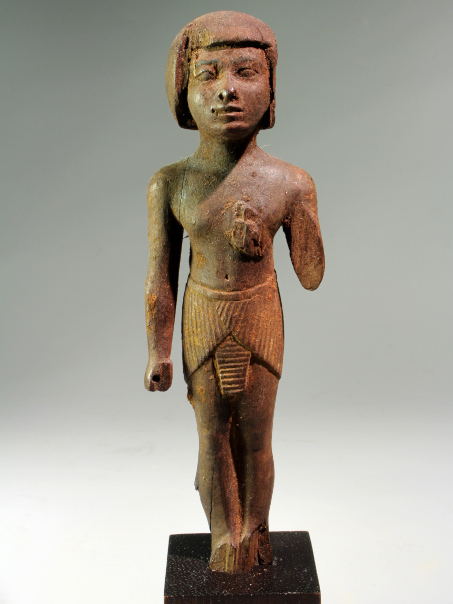 Description:
A small but extremely fine statuette of a standing man, made of wood with remnants of the original black paint.

The man is dressed in a short, pleated kilt. He is depicted standing, the feet side by side. His left arm, now partly lost, was bent and held to the chest. His stretched right arm is held against his body in a classical position. The right hand is clenched and has been pierced, probably to hold a sceptre, staff or baton or other implement that can sometimes be seen in the hands of high officials, such as the peglike object often seen in the clenched hand of male dignitaries from the Old Kingdom onwards.

A short, straight wig frames the finely modeled face. The details of his face were not just indicated or traced in paint (as was often done), but the large, almond shaped eyes, the eyebrows, the broad nose and the mouth with fleshy lips were carefully sculpted from the wood. The details are painted in black.

Parallels:
A similarly small wood statuette of far less quality, dating to the reign of Akhenaten, can be found in the Louvre Museum Paris (inv.no. E11563). Another one, similar in posture but much larger and depicting royalty, also dating to the same period is in the Roemer- und Pelizaeus-Museum Hildesheim (inv.no. RPM 6003); see also Seipel (2001), no. 31.

Condition:
Some age related, stable cracks, wear and other damage to the wood, as can be expected from an object that is this old and was made of perishable material. Feet, part of the left arm and small area of the wig now lost, all as shown on the photographs. Else in a great condition.