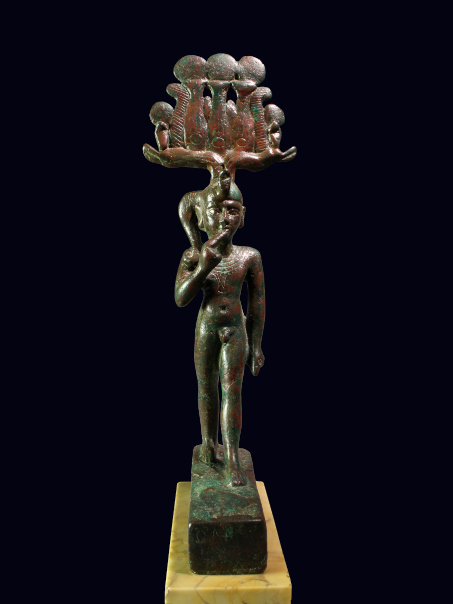 Description:
A large statuette of a god who is relatively rarely depicted in bronze, with an inscribed base and eyes that are inlaid with silver.

The god is shown in a striding position, his left foot forward, on a rectangular base with carries an inscription: "May Khonsu give life ... Padi-Osiris". His left arm is held next to his body with his hand clenched. He is depicted as a young chubby boy, with the side-lock of youth, naked, with one finger of his right hand pointing towards his mouth. He is wearing a skull cap, with a uraeus protruding from the forehead, and an elaborate version of the so-called hemhem-crown. Around his neck he is wearing a broad collar, consisting of several layers, and a pendant, probably the heart amulet that some child deities wear, identifying them as heirs and protecting them (Malaise (1975), p. 122-129; Sandri (2006), p. 102-103; Budde (2010), p.3).

The statuette shows many details that are commonly seen as attributes of child deities, above all Harpokrates (the Greek form of the Egyptian name Her-pa-khered, Horus the child). However, the inscription on the base identifies the god as Khonsu. This was the god of the moon; his name (translating as "he who wanders") described the movement of the moon across the sky. The god was often associated or identified with Harpokrates, both gods being children (both bearing the epithet pa-khered since the later New Kingdom (Yoo (2012), p. 152-153). As a result Khonsu was occasionally also shown with the attributes of Harpokrates.

Provenance:
French private collection, acquired in the 1950s; thence Roswitha Eberwein Antike Kunst, Göttingen, Germany; thence German private collection H.P., acquired from the above.
A French export license (no 147951 of 12-8-2013) and Art Loss Register certificate no S00078102 of 6-9-2013 are available.

Background information:
The statuette shows several details that are significant iconographic markers of child deities (Budde (2010), p. 2-3). The index finger at the mouth was an indication of childhood, although the classical authors later understood it to be a gesture of silence; see for example the Roman scholar Marcus Terentius Varro (116-27 B.C.), who wrote: "Harpokrates with his finger makes a sign to me to be silent" (De Lingua Latina V, 57) or Publius Ovidius Naso (43 B.C.-17/18 C.E.), who wrote about "the god who urges silence with his finger" (Metamorphoses, Liber IX, 692). The notion of the god with the finger to the mouth was known already in the Pyramid Texts of the Old Kingdom, where Horus is described as the “young boy with his finger in his mouth” (Pyramid Texts of Teti, spell 378, §663c; Sethe (1908), p. 364; Allen (2005), p. 88 and 95).

The side-lock of youth (see Tassie, 2005) was also known an a hieroglyphic sign for the sound khered (child, being young, to rejuvenate) and for the sound rnpi (to regenerate), referring to the principle of regeneration, which child deities guarantee. The nudity of the child possibly symbolided renewal and fertility (Derriks (2001), p. 61-67; Goelet (1993), p. 22-25), and rolls of belly fat denoted abundance.

The hemhem-crown is a more elaborate version of the atef crown. The basic form of the hemhem crown consists of three bundles of reeds tied together, decorated with feathers, uraei and sun disks, all on top of a pair of long, spiral ram's or sheep's horns. The name of the crown was derived from the Egyptian word hmhm, to roar, to cry; the name might indicate that the crown was related to warfare; it was also connected to the rising of the sun and its rebirth (during which, according to mythology, a battle took place).

Papyrus Carlsberg VII, 17 calls the crown "the great atef of Re and Osiris", making clear that these complementary deities manifest themselves in the crown. The symbolism of the hemhem therefore implies the cycle of becoming and passing away, and according to this text it is in turn related to the cyclical rejuvenation and ideas of rebirth (Budde (2003) p. 53-55).

The association of Khonsu and Harpokrates is much older than the statuettes depicting the gods. Already the Coffin Texts of the Middle Kingdom describe how Isis enabled Horus to become the lord of the night sky (so the moon; Coffin Text Spell 760; De Buck (1956), p. 390). In accordance with the Egyptian principle of duality, the notion of the moon child was conceived in opposition to that of the solar child; it was first associated with Khonsu-pa-khered (Dégardin 2000; Budde (2010), p. 6). Khonsu-pa-khered was also called "the one who repeats the births of Horus as a regenerated boy" (Budde (2010), p. 5).

The worship of child deities did not become prominent in temple cult and private devotion before the Third Intermediate Period. The first developments in their theology can be observed at Thebes, where Khonsu and Harpokrates were worshipped as sons of Amun (Budde (2010), p. 7). The typical iconography of Khonsu as a youthful deity (with the side-lock of youth) is first attested during the New Kingdom. In a pure child form (or conflated with Harpocrates, a chubby boy with a hand in his mouth, with a side-lock) Khonsu did not appear until the Late Period.