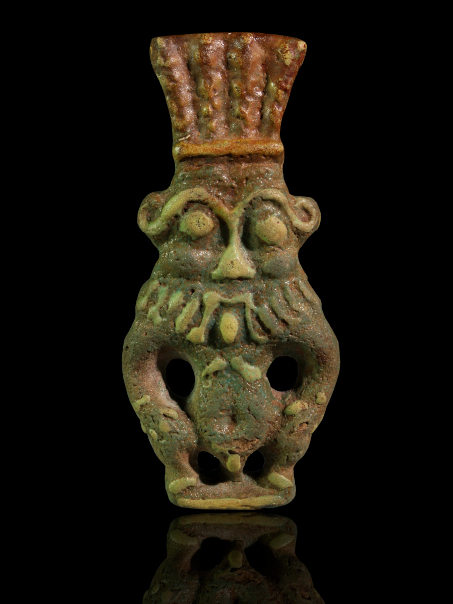 Description:
A bichrome amulet in the form of the god Bes, depicted standing with his hands resting on the knees of his short crooked legs. He is wearing a large feather headdress.

His grotesque and gruesome human face has a protruding tongue, a beard, wide open eyes and round, lionine ears, all adding to his un-Egyptian and therefore fearsome look, meant to ward off all dangerous creatures.

Details were added in applied yellow; his ears, eyebrows and nose were indicated in one continuous line, giving the amulet a stylized, almost modern look. The amulet was intended to be worn, since it was pierced horizontally for suspension.

Background information:
The god who is usually called Bes was in fact the personification of a whole group of very similar gods, whose characteristics are too much muddled for us to be able to differentiate them and who, therefore, are all commonly referred to as Bes.

Bes is a god with a remarkable appearance; his face, surrounded by a lion’s mane and with his tongue often sticking out of his mouth, is quite gruesome, and so is his body which is that of a dwarf, with short crooked legs and usually a tail; normally he is wearing an animal skin and a headdress with feathers. Often he is holding one or more knives or snakes.

His main task is to give protection, especially in circumstances where dangers are lurking, such as during childbirth; so-called magical knives, used in the Middle Kingdom during rituals surrounding childbirth, depict Bes and other protective creatures; similarly, in later periods, Bes is present in the so-called birth house (mammisi) in temples.

But not only during special moments (rites de passage) all kinds of dangers were lurking, they were also feared in daily life. During the night people were sleeping, unaware of what was happening around them; to protect them, representations of Bes (or similar gods, like Taweret) were put on furniture like beds and headrests. Depictions of the god were also worn as amulets as a general protection against evil.

Condition:
Intact with some wear and minimal losses to the applied yellow; an old inventory label underneath, reading "A37".