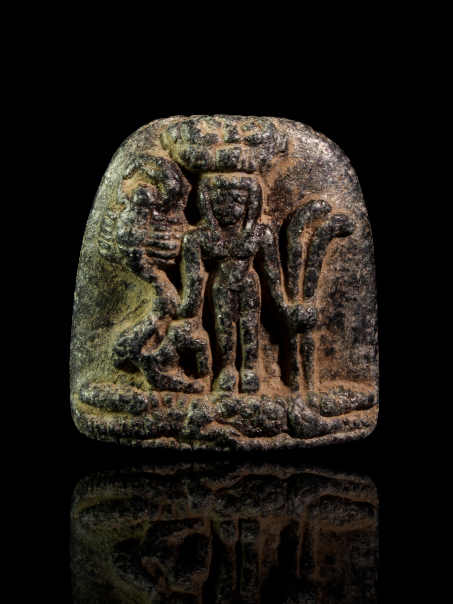 Description:
A small stone magical stela, depicting on the front in raised relief a standing figure of Horus the child, the son of Isis, who in this context is often called the saviour. He is standing on crocodiles and is grasping snakes with his left hand and a scorpion with his right hand; another creature in his right hand is difficult to identify, but based on parallels might be a lion. Over his head the face of the god Bes is visible.

The reverse carries six lines of hieroglyphs, and there is also a column of text on each of the sides. However, although some noxious creatures can be discovered among these hieroglyphs, the signs are rather garbled and make no obvious sense.

Background information:
Standing on crocodiles expressed the same idea as grasping other dangerous animals that could sting or bite: by doing so the young god shows that he has conquered them, which equalled triumphing over the forces of evil in general. The background is the story in which Isis decided to hide her newborn son Horus in the marshes in the Delta, to prevent his uncle Seth, the murderer of Horus' father Osiris, from finding him. In the Delta the child was exposed to all kinds of other dangers, but thanks to magical powers managed to overcome these.

Most magical stelae show the face of Bes above Horus. Although Bes was primarily a protective god, the accompanying texts on the stelae inform us that Bes is here regarded as the old sun god, who is rejuvenated in the (solar) child.

Large stone magical stelae were set up in temple precincts, where water was poured over them to absorb the magic of the images and spells with which they were decorated. When drunk, this water would afford prophylactic protection against noxious animals or cure those who were already stung or bitten (Andrews (1994), p. 38-39). One of the largest, and most famous, is the Metternich Stela in the Metropolitan Museum of Art, New York (Allen (2005), p. 49-63, no. 52). However, it seems likely that small stelae like the one on offer here were used as an amulet, giving magical protection, rather than being used to impart its magic to water poured over it for drinking (Allen (2005), p. 64, no. 54). For such stelae see also Sternberg (1999), vol. I, p. 94f.

As is often the case with such small, amuletic objects, the scene is somewhat worn, making part of the relief scene slightly indistinct; this was caused by frequent rubbing of the image in antiquity to absorb its magical powers.

Such stelae are often called a cippus, although this word originally indicated a small, low and usually inscribed stone pillar set up as a marker (milestone, landmark, boundary post, gravestone or marker of another sacred place) in ancient Greece and Rome.

Condition:
Intact with some wear and encrustation.