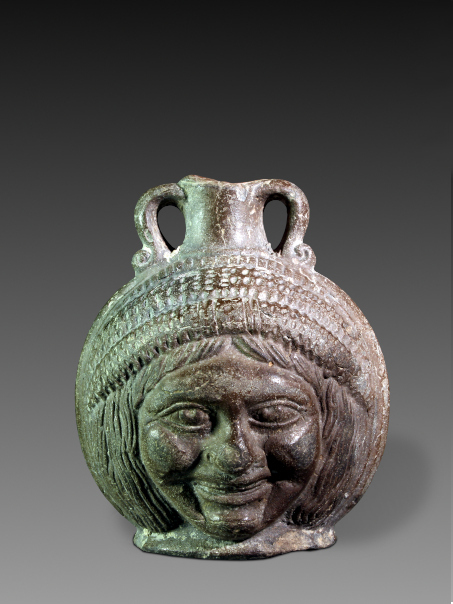 Description:
A small blackware water bottle from Memphis, exquisitely decorated with two female portraits, shown back to back and therefore looking in opposite directions. The faces of the women, smiling somewhat maliciously, were carefully executed, with large lidded eyes, the irides indicated, and crow's feet lines to the sides. They have chunky noses and rather high cheeks. Their mouths have thin lips and are slightly open, showing their bared teeth.

Both faces were formed in the same mold, but the coroplast worked them differently, so that the hairstyle is not the same. One of the faces shows small curls on the forehead and has slightly curly locks all around her face, whereas the other face shows hair that is vertically combed and held in place by a stippled wreath.

Perdrizet, in his 1921 publication and looking at the different hairstyles and the black colour of the clay, suggests that one face is that of an Egyptian woman and the other face that of Medusa.

Provenance:
Collection of Dr. Daniel Marie Fouquet (16 March 1850 - 13 August 1914), Cairo; published in 1921.
Dr. Fouquet was a French doctor, who moved to Cairo in 1881. There he assisted Maspero and other Egyptologists during their medical examinations of mummies, and took an active part in the unwrapping of mummies, including royal mummies. A large-scale oil canvas painted by Philippoteaux in 1891, titled Examen d'une momie, shows the unwrapping of the mummy of a priestess called Tawedjara by Dr. Fouquet in the presence of several Egyptologists (Riggs, p. 84).
Dr. Fouquet started what would be come his extensive collection of Egyptian, Coptic and Islamic antiquities in 1882 in Cairo; with each acquisition he enquired about, and kept record of, the exact find spot of the object. He was known for buying what he liked without considering the price. Maspero in one of his letters (dated 14 December 1885) wrote "The smallest bronze sells for seven hundred to eight hundred francs: this is due to Dr. Fouquet, who buys at all costs and has doubled the value of antiques" (Cecilia Benavente Vicente (2021), p. 103). After his death the collection was dispersed through auction at Hotel Drouot in Paris in June 1922.

Condition:
A minor chip at the mouth has been professionally restored (ca. 5 mm); some minor damage to the bottom, as shown; otherwise intact and excellent, with crisp modeling; the number "1271" was written in ink on the bottom.