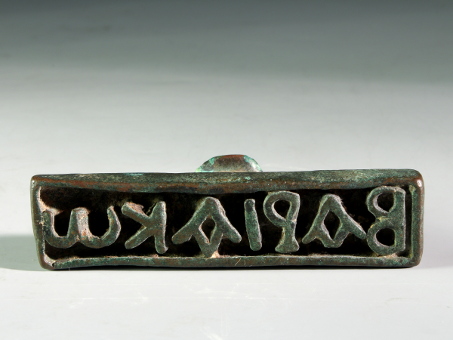 Description:
A rectangular seal, cast in a mould and made of bronze, with a ring loop or handle across its back. The front is decorated in very deep relief with an inscription in Greek letters but in the Aramaic language, reading BAPIAKW ("Son of Iaco(b)").

Many Roman stamps bear names of individuals, and some even mention their profession. For example, an example in the Museum der Brotkultur in Ulm (Germany) names a certain Clodius who was a mercator (vendor) (Grünbart, p. 15).

Stamping, the marking of different kinds of objects, was often used in all ancient cultures (for an overview see Grünbart, p. 14-16), for example for marking and labeling products, to express ownership or for administrative reasons, such as the organisation of the provisioning of armies on campaigns, with its collection and distribution of food. Similarly amphora handles were stamped, showing the producer or trader of wine or other products, or indicating the name, type, and quality of the container’s contents). The practice of sealing wine amphorae with stamps is mentioned in the Talmud (Meyers, p. 155 with reference to a publication by Reifenberg). In late Roman and early Byzantine periods the stamps were superseded by lead bullae and seals.

Stamps like the one offered here would be too large for marking amphorae. Therefore they are commonly understood as bread stamps. Some were used to indicate the ritual fitness of loaves, others to identify the bakery or the family that prepared the loaves.

The dough for the breads was stamped before the process of baking in the oven, not for decoration as could also be the case in later times, but to identify the breads once they had to be taken out of an oven which was used by multiple people at the same time (Caseau, p. 610-611).

In late antique and Byzantine periods, stamps were used to mark the loaves offered in eulogy to churches by the faithful, or to the faithful by the clergy of sanctuaries (Caseau, p. 609 ff.), and could even impress religious symbols.