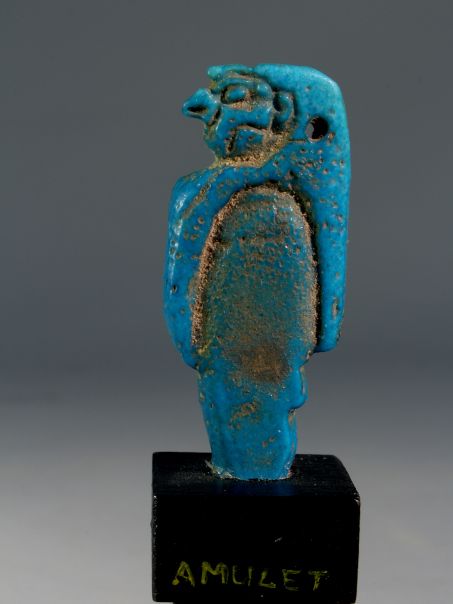 Description:
This is a small amulet, made of Egyptian faience. Depicted is the falcon-headed god Qebehsenuf, one of the children of Horus. He is wearing a tripartite wig. The amulet was pierced horizontally in the wig for suspension.

The children of Horus had the task to protect the internal organs of the deceased, which were removed from the body during mummification and which were stored in four so-called canopic jars. Qebehsenuf was especially protecting the intestines, and spells inform us that he himself was helped or protected during this task by the goddess Serket.

The amulet was mounted on a small wood base, partly inserted into it; the base is inscribed with the word "Amulet" on the front and the number "31" on the back. The back of the amulet displays a pattern which may or may not have been caused by the amulet being in contact with fabric used for mummification.