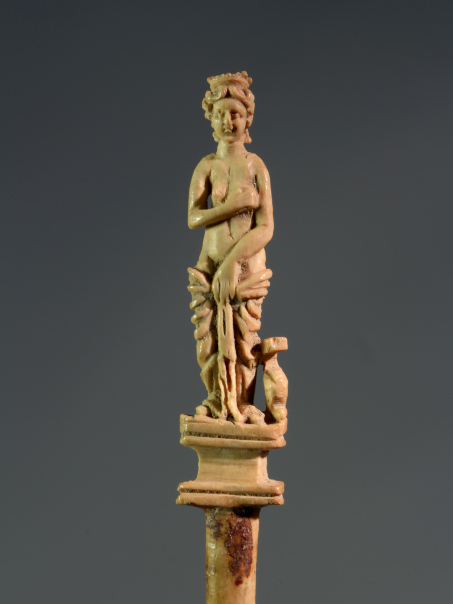 Description:
An object rarely seen on the market: a distaff made for ceremonial purposes. Distaffs played an important role during Roman wedding ceremonies, being carried by the bride in the marriage procession.

It is a bone implement consisting of a long, slightly oval rod, a ring at the base with notches, and a decorated top. This top is surmounted by a carved statuette of the goddess Venus (Greek Aphrodite), standing on a raised plinth with a fish at her feet; she is depicted almost naked, holding drapery around her legs with her left hand, preventing it from falling down, and covering her left breast with her right hand.

Function:
Until recently objects like this were thought to be stirring rods, used for stirring, mixing, or applying cosmetics and ointments; so also when this object was auctioned at Bonhams in 2003. Sometimes they are called "perforated spoons" and considered to be "spoon brooches" (Eckardt (2014), p. 134; 141). About one similar bone object (without the goddess though) in the Metropolitan Museum of Art, New York (accession number: 24.97.81) the museum remarks that it is unlikely to have been used as a stirring rod, and adds: "A more likely interpretation is that it was a baby’s rattle". Yet another one in the Petrie Museum London (inventory number UC71153) was initially described as a “mystery” artefact or a “cosmetic” tool of unknown function.

More recent studies have shown that this object is a ceremonial "finger distaff", also known by the German name “Fingerkunkel”, a luxurious and smaller version of a real distaff, see for example a close parallel in the Archäologisches Museum, Westfälische Wilhelms-Universität Münster, Germany (inv. no. 3503).

Such an object played an important role during Roman wedding ceremonies, when it was carried by the bride in the marriage procession (Larsson Lovén (2007), p. 230). Later in life, it was presumably amongst the most prized possessions of the matron; it symbolised the care she took of the household, being in charge of the wool working activities within the home. It may also have been used to emphasise status during public appearances or in front of guests (Danković (2019), p. 223).

A real distaff was an important tool during spinning activities; it held a bunch of unspun wool, from which fibres were extracted. These were connected to some yarn on a spindle, already spun, and by rotating the spindle the fibres were spun. The distaff was held in one hand, usually the left one, and the spindle was worked using the other hand. There are distaffs without and with a ring at the bottom; with the latter the person using it had a better grip during work (Danković (2019), p. 218). For a typology of Roman distaffs see Facchinetti (2005), p. 221, fig. 6; Danković (2019), p. 220, fig. 9.

Our object is too small to be a real distaff, and it would not be strong enough to be used in real life; also the decorating statuette on top would hinder the work. Often these objects are made of bone, ivory, glass, amber, bronze or even precious metals (Danković (2019), p. 218), materials too luxurious for real use.

Therefore it has been proposed that such objects were artefacts of symbolic and ritual character. They seem to have been used in funerary rites; a great majority of bone distaffs discovered during excavations was found in cemeteries, more specifically in graves (Danković (2019), p. 218; 223). They are also depicted on gravestones for women; together with spindles they are often seen in funerary portraits, both in the eastern Aegean and Syria (Cottica’s (2007), p. 223) and in western and central European areas (Carroll, p. 301).

Another notion should also be mentioned. Pasztókai-Szeöke (2011, p. 132-133) has pointed out that the majority of the distaffs decorated with the statuette of a woman show an abdominal cut rising upwards from the navel; she believes that this can be interpreted as the healed scar of a Caesarean section, and therefore may be an allusion to a problematic, life-dangerous, but survived delivery, and to the biological connection between woman and infant. In this context she also refers to the symbol of fecundity as expressed by the nude, idealistic body for which the prototype is the Capitoline Venus, with full breasts, fleshy limbs and ample hips.

She also connects motherhood, birth and spinning. In antiquity, spinning was a symbolic representation of control over human destiny (birth, life and death). In Roman mythology the duty of three goddesses of fate was to control the life-thread of each mortal. Nona (the Roman equivalent of the Greek Klotho) spun the thread of life from her distaff onto her spindle, Decima (in Greek Lachesis) measured the thread of life, and Morta (in Greek Atropos) cut the thread of life at the moment of death. Therefore Pasztókai-Szeöke sees distaff, spindle and spinning in general as a metaphor of the ideal marital relationship with embedded complexity of values, such as female chastity, fidelity, fertility or motherhood, and industriousity.

Background information:
Spinning was one of the domestic duties of women, and was even seen as the ideal activity of respectable women, symbolising a woman’s laboriousness and virtue; especially the phrase lanam fecit (she worked the wool) was often used in this context. In Roman literature one can read the story of the virtuous Lucretia: "The daughters-in-law of the king (...) were seen at a luxurious banquet (...), but Lucretia, though it was late at night, was busily engaged upon her wool" (Titus Livius, Ab urbe condita, Book 1, 57, 9). A similar idea is expressed by Tibullus: "She tells you tales and, when the lamp is lit, draws long threads from her distaff" (Albius Tibullus, Elegiae, Book I, 3, 85-86). Plutarchus speaks about "an honest and virtuous woman (...) whose statue stands in the temple (...); there her sandals and her spindles were dedicated, as significant memorials of her housewifery and industry" (Plutarchus, Quaestiones Romanae, section 30).

The importance of wool working by women is also clear in epigraphic sources; the words lanam fecit can be found on many epitaphs, the most famous one being that of a woman called Claudia (2nd century B.C.): "She was charming in conversation, but proper in behavior; she kept the house, she made wool" (Corpus Inscriptionum Latinarum, 1211); these texts show that the expression was considered to emphasize the impeccable charachter of a woman (Larsson Lovén (2007), p. 231). Similarly, women's tombstones sometimes depict personal belongings, and spinning implements can be seen among them (Larsson Lovén (1998), pls. XVII-XIX; Trinkl 2000; Danković, 219).

Wool, and the ability of spinning and weaving, was so important that it also played a symbolic role in Roman wedding ceremonies. The wedding dress was supposed to be woven by the bride herself, as proof of her ability to weave and as symbol of her new position as a housewife. During the ceremony, a distaff and a spindle were carried by the bride in the marriage procession (Larsson Lovén (2007), p. 230); classical authors from the first century C.E. write about "the custom, on the marriage of a young woman, of carrying in the procession a dressed distaff and a spindle, with the thread arranged upon it" (Gaius Plinius Secundus, Naturalis Historia, Book VIII, Chapter 74); "when they have introduced the bride, they spread a fleece under her; and she, having brought in with her a distaff and a spindle, all behangs her husband's door with woollen yarn" (Lucius Mestrius Plutarchus, Quaestiones Romanae, section 31).

The statuette on top is a representation of Venus Pudica or Pudicitia (modest or chaste Venus), a type that ultimately derives from the Aphrodite of Knidos, a statue created by the renowned sculptor Praxiteles in the 4th century B.C.; this statue is now lost, but several Roman copies of the work still exist.

It has been suggested that Venus is depicted here immediately before or after taking a bath, which according to some sources was in the sea; this could explain the fish at her feet. Related depictions show Venus Anadyomene (rising up from the sea at birth), in which the goddess covers her pudenda in a similar way; in this scene she is accompanied by a dolphin. Many representations of this moment are known, starting with a much admired depiction by the painter Apelles of Kos in the 4th century B.C., and followed by the works of great artists of later centuries like Botticelli, Titian and many others, including Picasso. The painting by Apelles was brought to Rome by the emperor Augustus, but is now lost; however, it was described by the Roman author Pliny the Elder (died 79 A.D.) in his Natural History. A famous mural from the Casa di Venus in Pompeii is believed to be based on the painting by Apelles.

Venus not only embodied feminine beauty but was also the patron goddess of marriage.