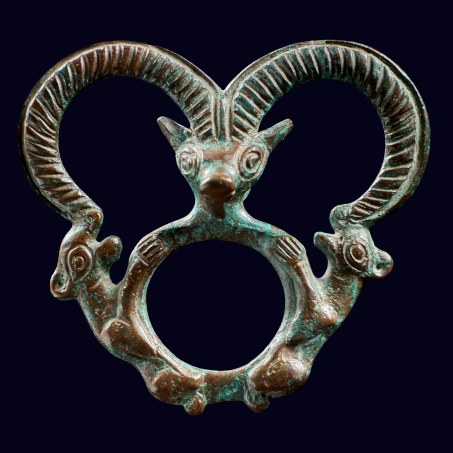 At the top of the central open ring the frontal head of a mouflon or an ibex is shown with very prominent horns, that are finely ribbed and gracefully curve towards the heads of two flanking felines. These are shown creeping up the ring, so that their slightly rounded bodies form part of the ring. The tips of the horns touch the muzzle of the predatory beasts. There is a suspension loop behind the head.

Although this was probably a functional object, the Luristan artists made it into an object of art. Nevertheless, western scientists have been debating the function and scene of objects like this for many years.

Some believe that they were pendants, and point to other instances were the size of the mouflon or ibex horns was exaggerated; it was a popular motif in the art of ancient Iran, that can frequently be found in ornamental objects, beads, and pendants, and was occasionally painted on Late Chalcolithic and Early Bronze Age pottery (Vadati, p. 255); for a gold appliqué in the shape of the head of a mouflon (from north-eastern Iran) see for example Maurizio Tosi - C.C. Lamberg-Karlovsky, "Pathways Across Eurasia", entry "Mouflon Head Appliqué" by Shoki Goodarzi, in Aruz - Wallenfels, p. 351-352.

Nevertheless, most associate the category to which our object belongs with horse-harness equipment, although no one is certain concerning their specific function or position; none has been scientifically excavated, nor are they represented in art. It was Moorey who dinstinguished them from cheekpieces, as the opening is generally too large to hold a mouthpiece; he suggested that they were harness rings placed on the shoulders of chariot horses (Muscarella, 164-166).

The scene depicted has also sparked discussion; the absence of written records from the area makes the complex imagery difficult to interpret. Some scholars have expressed their opinion that the scene depicts an archaic myth of the so-called mouflon genie taming wild beasts (for a statuette of the mouflon genie see Vadati, p. 258; Benzel a.o., p 54-55; Aruz - Wallenfels, p. 46-48, or a seal in the Louvre (inv.no. AO 22919), decorated with a genie with a mouflon head). In this aspect the scene resembles the well known "Master of the Animals", which has a similar symmetrical shape. The enormous size of the horns in depictions have been thought to emphasize the symbolic value of the animal (Belloni, no. 15), and it has also been noted that there are scenes, such as rock paintings, in which a curling motive resembling a pair of large mouflon horns was given a central position, although the reason or special meaning for this is now forgotten. Compare the fact that until the beginning of 20th century the horned skull of mouflons was often applied at the entrance of houses in certain rural districts of Iran, as protection against the evil eye, which illustrates the powerful symbolic meaning of the mouflon horns in recent times (Vadati, p. 255).

On the other hand there are many scholars who believe that the scene shows two camivores attacking a mouflon, since the mouths of the predators are open, gripping the tips of the horns, and since they seem to hold the mouflon with their claws, the upper part of the central ring forming the shoulders in that case.

Equally uncertain is the species of the animal depicted in the centre: is it a mouflon or an ibex? Both were known in ancient Iran and were frequently depicted in art, but quite often it is impossible to be certain which of the two is shown; compare for instance Hansen in Aruz - Wallenfels (2003), p. 219; Vadati (2021), p. 255.