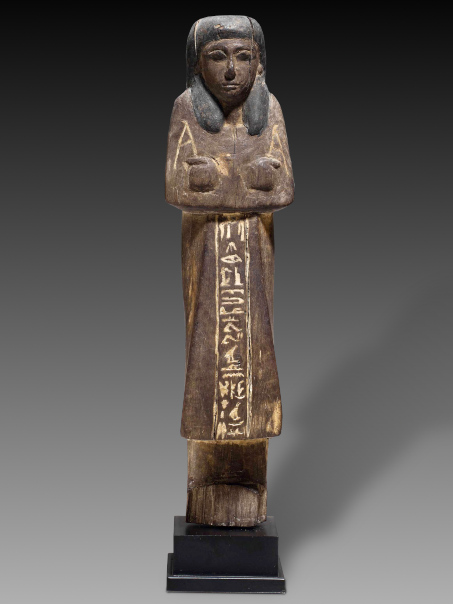 Description:
A shabti made of wood with details painted and inlaid, for a man whose name probably reads Hernesy. He is shown mummiform, and wearing the characteristic kilt with a triangular apron, along which a single column of hieroglyphs was lightly incised, which were then filled with what appears to be white gesso. His almond-shaped eyes are outlined in black, and he is wearing a bipartite headcloth, which was also painted black. His arms are folded at the chest and his hands, emerging from his vestment, are each holding an incised hoe. He carries a seed bag along his back.

The text on the apron informs us about the title and name of the owner: The illuminated one, the Osiris, the Chief Offering-Bringer, Hernesy(?).

For the name Hernesy see Hermann Ranke, Die ägyptischen Personennamen, Band I (Glückstadt, 1935), p. 249, no. 12 (with a different spelling for the Late Period).

Condition:
Loss of the feet; some expected cracks that do not detract: one running down the far left size of the face, extending over the head, through the seed sack, and running down the full length of the figure, another starting above the right ear, deepest at the top of the head and ending near the bottom of the wig; a hairline crack around the right shoulder, both front and back; a small crack, not too noticeable, between the hands; a hairline crack to the right side of the kilt, one that is even fainter on the left, and there are cracks that follow the vertical lines that define the glyphs; minute amounts missing of the filling of the hieroglyphs, as to be expected; otherwise intact. A very fine example. With a custom made stand.