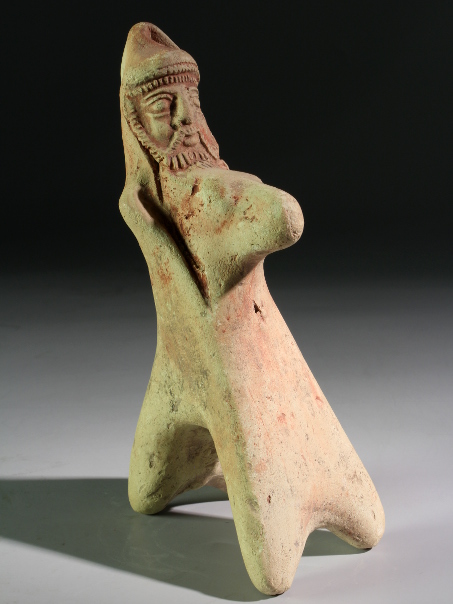 Description:
A cream pottery figure, most likely Syro-Hittite, depicting in an abstract way a horse and its rider, their bodies blending into a single, triangular form, with the head and upper body of the man directly behind the horse’s head, without any indication of the man’s legs; similarly the arms of the man and the reins of the animal are rolled into one.

Most of the statuette was made by hand (in fact, some finger prints from the artist are still visible in the clay), but the face was made in a mould, detailing the large eyes, eyebrows, beard and moustache, as well as curls visible under the conical, pointed cap and its decoration. Some traces of red paint are still visible on the object.

Similar statuettes that were on the market recently are invariably dated either 2000-1500 B.C. or 1500-1200 B.C., but we believe that in fact they may be much younger than that. In view of the use of a mould, this particular statuette is believed to date from the 5th or 4th century B.C.

Condition:
In very good condition, with some minor age related damage to the surface as shown; traces of red paint.