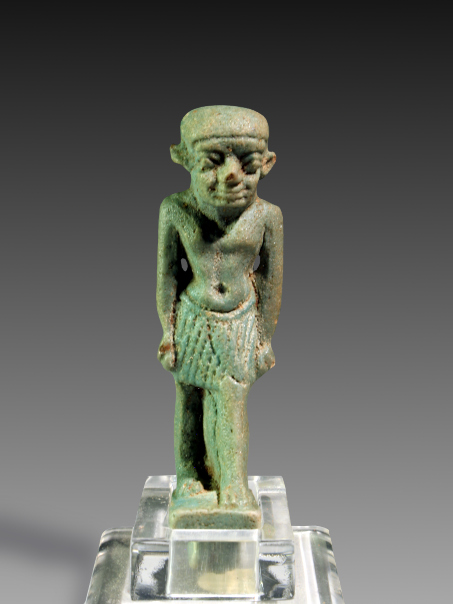 Description:
A large amulet showing the god Pataikos in a walking position, his left foot forward and with his stretched arms held against his body with his fists clenched. He is wearing a short, pleated kilt. His head appears to be bold, but when one looks closer it becomes clear that he is wearing a tight-fitting skull cap, like Ptah. His face has details rendered in relief, such as the large, bulging eyes with eye lids, lips, ears and nose. With a back pillar and on an integral plinth; the back pillar with a hole for suspension; a suspension loop beneath the base.

Pataikos was a god (or sometimes a member of a whole group of similarly looking gods) who gave protection. He is mostly known from amulets. In some cases he is shown standing on crocodiles (a symbol of his triumph over them) and having snakes and other dangerous animals in his hands.

Pataikos was associated with Ptah and Ptah-Sokar. The name Pataikos goes back to Herodotus, the Greek writer who visited Egypt in the 5th century BC. He tells us that a statue of the god Ptah was kept in the temple of Memphis, which had the shape of a dwarf and which reminded him of a statuette in similar shape in Phoenicia. He also informs us that the god represented as a dwarf was regarded as the son of Ptah.

Condition:
Intact with a few spots, such as the tip of the nose, where the surface has very minor damage, caused in antiquity, probably when the amulet was pressed in a mold; some minuscule air holes. Overall in a very good condition.