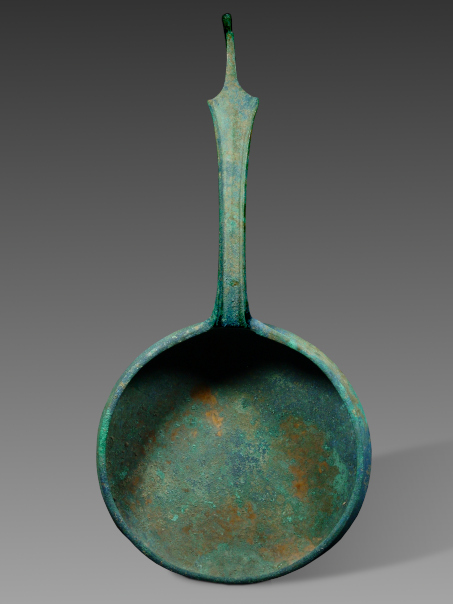 Description:
A very large and rare patera, consisting of a shallow, pan-shaped bowl of circular form with a flat bottom, and a long flanged handle which ends in a hook for hanging.

The terminal has a very interesting, almost modern form which can be "read" in two ways: either we see a bird's head with a long curving neck, looking away from the handle, or the image of a swan swimming towards the patera, its curving neck merging into the handle; the engraving on the terminal adds to this illusion.

There is some discussion among scholars about the question for what purpose a patera was used: commonly accepted is the view that they were used for rituals, to pour libations of wine or other liquids, but some believe that they played a role as part of a banquet service. The difference in shape, with or without a handle, may also play a role here.

Condition:
Intact, in excellent condition with a superb patina and patches of golden river patina.