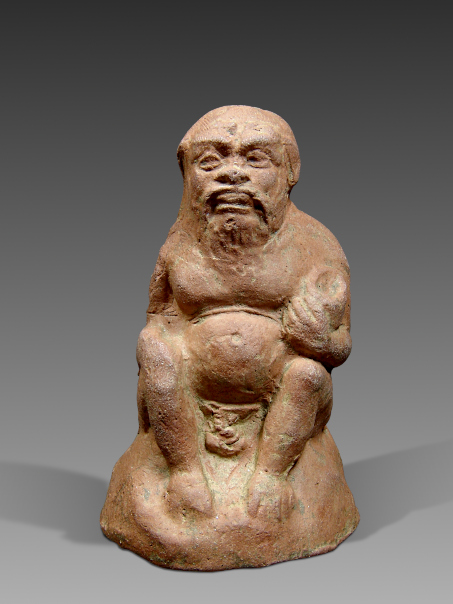 Description:
This is a wonderful terracotta with lots of character. Depicted is a grumpy looking, old man who has a full beard and a large moustache, fringes of hair at the sides of his balding head, protruding eyebrows, wide open eyes, and a snub nose. He is seated on a rock, and has a prominent belly. Due to his slumped posture the fat of his belly shows a skin fold. As he is nude, his genitals are visible, resting on the rock. In his left hand the man is holding a drinking horn or bowl, and his right hand is resting on his leg.

This is most likely Silenos, the companion and tutor of the wine god Dionysos. However, it is also possible that he is one of the sileni, the elderly daimones in the following of Dionysos, fathers of the satyrs and sons of Silenos.

Silenos was the god of wine-making. He was notorious for his abundant drinking, so that he was usually drunk and had to be carried or supported. He is called the "most drunken of the followers of Dionysus". As such he also became associated with drunken excess. He is often depicted with a wine cup in his hand.

Classical texts do not spare him in their descriptions. He is "staggering, faint with palsied age and wine" (P. Ovidius Naso, Metamorphoses, XI, 90) or "sleeping, flushed, as was his wont, with wine of yesterday; not far aloof, slipped from his head, the garlands lay, and there by its worn handle hung a ponderous cup" (Publius Vergilius Maro, Bucolica - Eclogae VI). In a theatre comedy a pimp called Labrax is compared to "an old Silenos, bald head, snub-nosed, with eyebrows awry, a narrow forehead, a cheating scoundrel, a plague of gods and men, full of vile dishonesty and of iniquity" (Titus Maccius Plautus, Rudens, act 2, scene 2; however, although the physical description fits the image of Silenos, the word used in the Latin text is silanus, which according to some scholars does not refer to Silenos).

The object was made of two parts in a mold, and has a rectangular vent hole on the back.

Condition:
Some superficial flaking on the right shoulder, some minor surface wear and scratching, otherwise intact and fine.