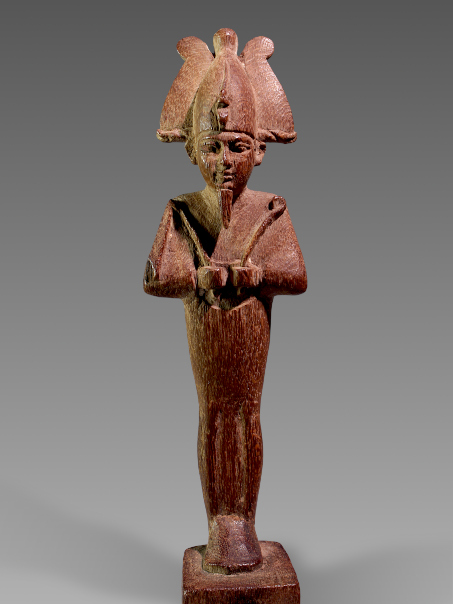 Description:
A finely carved wood statuette of the god Osiris, depicted in the traditional standing mummiform pose, his arms protruding from underneath the enveloping mummy wrappings. He is holding a crook and flagellum across his chest, the crook in his left hand and the flail in his right hand. The position of the hands at the same level is what is usually referred to as the Middle-Egyptian position (see Günther Roeder, Ägyptische Bronzefiguren (Mitteilungen aus der ägyptischen Sammlung, 6) (Berlin, 1956), § 224; however, specimens with the hands in this position are known to have come from the Delta also, so it is not necessarily an indication that this statue comes from Middle Egypt).

Osiris is wearing the atef crown which has a rather elaborate form: the white crown of Upper Egypt is flanked by feathers and rams horns; a central uraeus (a protecting cobra) is showing its hood, the rest of its long body running up all along the crown. The god also wears a false beard, and is standing on an integral rectangular plinth. There is a tenon projecting from beneath the plinth, intended to attach the statuette to a larger base.

Size:
Height 15.3 cm including a tang below the plinth; 16.5 cm. including perspex stand.

Provenance:
Mitsukoshi Department Store, Tokyo, Japan - exhibited and published in 1978; thereafter with Helios Gallery Antiquities, Wiltshire, United Kingdom. Comes with a photocopy of the relevant pages of the 1978 publication.

Condition:
Intact as shown, with some very minor losses and expected wear. Overall in excellent condition.