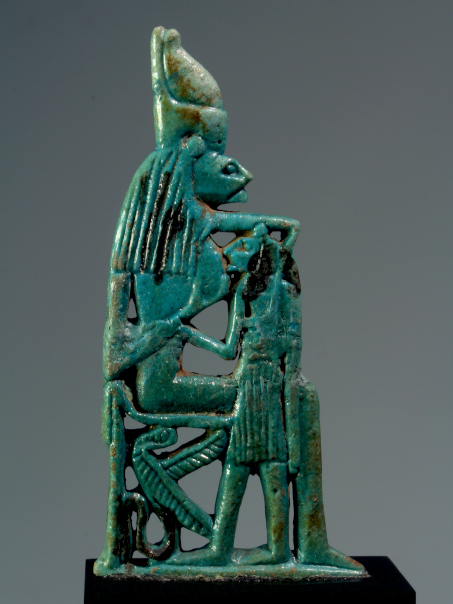 Description:
A rare and very large flat-backed and openwork object, made in glazed Egyptian faience with a beautiful blue-green colour and dark highlights. Depicted is the syncretistic goddess Sekhmet-Mut, with the body of a female human and the head of a lioness. She is wearing the Double Crown of Upper and Lower Egypt, also known as the sekhemty (or its Greek form, the pschent), the two Powerful Ones, a combination of the white crown of Upper Egypt (Hedjet) and the red crown of Lower Egypt (Desheret).

With her right hand the goddess is offering her breast to a standing youthful child, who also has the head of a lion and a human body; this is most likely the god Nefertem, her son. The left hand of the goddess supports the head of the young god.

The goddess is seated on a low-backed throne, the side of which is decorated with a winged serpent, extending his protecting wings. The throne of Sekhmet is often decorated with snakes; these are commonly interpreted as a representation of one of the decans; Egypt knew 36 decans, each dividing the twelve zodiacal signs into three periods of ten days; usually the animal is the god Nehebkau, who in this period was considered a source of protection in the land of the living and in the underworld (Shorter (1935); compare Kákosy (1982a), p. 165; 176-177; 183; see however Nemeth (2012), p. 60, for the identification); this god is primarily shown as a serpent or as a semi-anthropomorphised serpent, but he can also have wings (Kákosy (1982b), p. 145-148; Lucarelli (2010), p. 5). According to Wilkinson the iconography of a winged serpent likely symbolised the protection the animal would bring.

The oldest scene in which a goddess is breastfeeding a child can be found in the mortuary temple of Sahure (5th dynasty) at Abusir, showing Nekhbet nursing the king as a young boy (Borchardt (1913), p. 35-36; pl. 18); for an overview of different goddesses (Hathor, Nekhbet, Renenutet, Werethekau and others) suckling the king or an infant deity see Elhabashya - Abdelgawad (2019), p. 3. For Werethekau see also Ouda (2016). Suckling here is a motif connected with coronation (Ouda, p. 1; Goebs, p. 244 and note 50 with further literature).

As an amulet the scene is relatively rare. Andrews (1994, p. 23 and fig. 19c) mentions an unusual form of a suckling goddess in the British Museum (inv. no. EA11314), also from the Third Intermediate Period, where a lion-headed goddess (which she calls Sekhmet-Mut) is standing to suckle a pharaoh. For another parallel see Blanchard (1909), p. 11 and plate XII, no. 48.

Background information:
Sekhmet was a lion goddess, associated with battle and war, and a solar deity. Her name means "Powerful One", which not only had to do with the character of a lion, but also illustrates her task in protecting the king and destroying his enemies. She was often associated with Mut, Wadjet, Tefnut and Hathor, who also had a fierce side, and with the cat Bastet who represented her softer side; a text in Dendera speaks of "raging like Sekhmet and friendly like Bastet". Another illustration of her fierceness is the fact that she could destroy even Egypt itself, by bringing illness and plague, and at the same time was believed to be able to cure whoever was ill. Priests of Sekhmet were often also doctors. Sekhmet was especially associated with Memphis, where she was the wife of Ptah and the mother of Nefertem in the triad of Memphis. She was also the mother of the lion god Mahes.

Nefertem is primarily known as the god of a water flower, but originally he was the primeval god, the young sun or Atum who came out of the primeval waters of Nun (like the water flower from which he emerged and with which he was associated) and who created the world. According to the Pyramid Texts of the Old Kingdom Nefertem once ruled alongside Re, the former over mankind and the latter over the gods. Later, Nefertem was still called "He who protects the two lands". He was seen as the god of light who drove away darkness as well as enemies, which may have contributed to Nefertem being associated with a lion. Nefertem was the son of Ptah and Sekhmet in the triad of Memphis, but in variant myths also other lion goddesses are mentioned as his mother, such as Wadjet or Bastet.

Provenance:
Royal Athena Galleries, New York and La Jolla, California, before 1982; published in their 1982 catalogue; collection of the US television industry entrepreneur John Kluge, acquired from the above in the early 1980s; with Royal Athena Galleries again in 1992; private collection of Jerome M. Eisenberg, New York; thereafter with Sands of Time Ancient Art, Washington DC.

Condition:
Complete; a break was professionally rejoined and stabilized, with very minor cosmetic overpainting. In excellent condition, a rare and superb example.