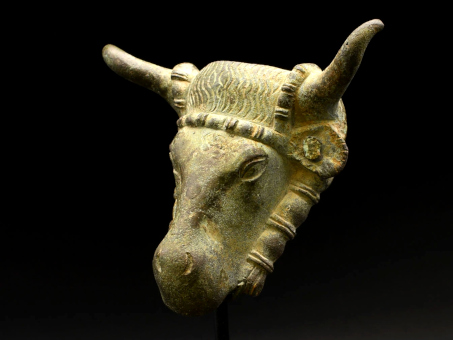 Description:
A beautifully made attachment in the shape of a bull's head. The head is triangular in shape and shows carefully executed, incised details: the eyes, the nostrils and the long hair, indicated by wavy lines. The animal is wearing an elaborate sacrificial harness with raised striated bands running across the forehead, near the horns and on the sides. The ears were perforated with pins for attachment.

The exact reason for depicting a bull in this case is unknown. Representations of bulls were popular in the Roman world. Like in many other cultures in the Mediterranean world, the animal was associated with notions of fertility and power. But the bull was also among the favoured animals killed as sacrificial victims, as shown on Roman reliefs (Ekroth, p. 331; compare Aldrete, 28-50).

In ancient Rome, like in Greece, animal sacrifice was performed as a ritual to communicate with the gods, asking for favours, protection, and help, or to appease them (Ekroth, p. 324). One of the most sacred rites of Roman religion was the suovetaurilia, during which a pig (sus), a sheep (ovis) and a bull (taurus) were sacrificed in a purification ritual, also as part of the lustratio, intended to bless and purify land, cities, and buildings, but also to free a newborn child of harmful spirits. Probably best known is the taurobolium, the ritual killing of a bull, practised in the cult of the Magna Mater, the Great Mother of the Gods, and documented in Roman religion from the late second century BC to the fourth century CE. And in the mystery cult of Mithras, the iconography found in the god’s sanctuaries all over the Roman Empire focuses on the deity slaying a bull, called tauroctony (Ekroth, p. 330-331).

Provenance:
Collection of Giorgio Sangiorgi (1886–1960 or 1965), then by descent; with Christie's New York in 2001; thereafter in a Maryland private collection, acquired from the New York trade in 2003; thereafter with Sands of Time Ancient Art, Wastington D.C.
Giorgio Sangiorgi was a collector and antiquities dealer, who had a gallery at the Palazzo Borghese in Rome. He assembled most of his collection beginning in the late nineteenth century. An exhibition of his ancient textiles was held at the Castel Sant’Angelo in Rome in 1911, and his ancient glass collection was published in 1914. Many of his pieces were subsequently acquired by private collectors and museums.

Condition:
A small section at the tip of the horns missing, which does not detract; otherwise intact and in a very good condition overall. A very fine example with many incised details; on a custom made mount.