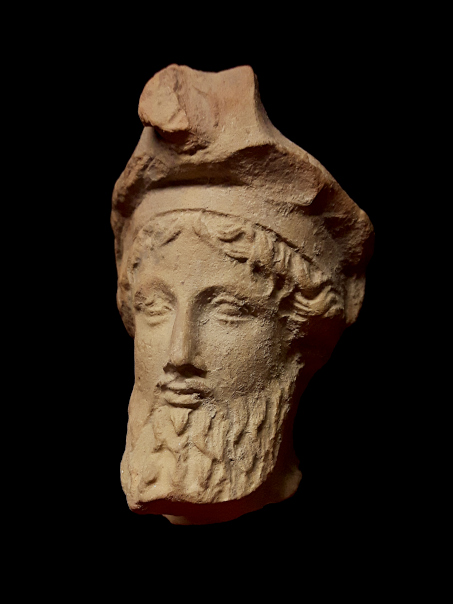 Description:
A terracotta head from the Greek colony Taranto (ancient Taras) in southern Italy, coming from a statuette of a banqueter. He has delicate facial features, a moustache and a long beard. He is wearing a diadem which keeps his centrally-parted hair from his face. On top of this he is wearing a headdress which originally must have been quite elaborate, with a high rising plume or palmette, and a rosette in the centre. This feature allows us to identify the man as a banqueter; depictions of the headdress of banqueters always show a central rosette attached to a plume, a lotus flower or a palmette, and in later phases an additional rosette could be added on either side of the head.

These heads belonged to statuettes showing a man reclining on a couch during a banquet (symposium); a clear example can be seen in the Ashmoleon Museum Oxford (inv.no. AN1910.768). Such statuettes were made and sold in shops near major sanctuaries. They were baked and brightly painted and then sold to customers who placed them in the precincts of the deities as acts of devotion. There were moulds for the reclining body and separate, differing moulds for all kinds of interchangeable heads, with and without beard and with differing styles of headdress, which could be further worked by coroplasts to add individual traits (Ashmead (1999), p. 52). These terracotta figures were usually made without a reverse and instead supported behind by vertical struts. The back of the heads were usually roughly formed, without any moulded details.

When over time the sanctuary became full, the excess of votive statuettes was removed by the priests, and buried in votive deposits nearby; usually they were deliberately broken to prevent reuse, which, apart from the fragility of the material, explains why almost all heads are damaged.

Various interpretations have been proposed for the reclining banqueter type. Scholars have identified him as Dionysos, because in their opinion the votive deposit belonged to the Sanctuary of Dionysos; therefore the symbolism is explained to be funerary: the funeral banquet. For the ideas of Dionysos being present during the symposium see Eckhardt (2017). The idea that these heads represent Dionysos himself is widespread, and can still be found in catalogues of dealers and auction houses.

More recently scholars separated the notions of a funerary banquet from banquets indicating status or hero worship. For these scholars the figurines were part of a cult which honoured a hero, such as Castor or Pollox, or Phalanthos, the hero-founder of Taras (Ashmead (1999), p. 52). Alternatively the head may represent the deceased as a hero. In any case it seems clear that these figures were connected to specific ritual and funerary practices.

Condition:
Fragment from a larger statuette, as shown, with some damage to the headdress; a very tiny spot of damage on the tip of the nose made good; some surface wear, pitting, scratches and encrustation as is common to ancient terracottas. A beautiful and expressive face.