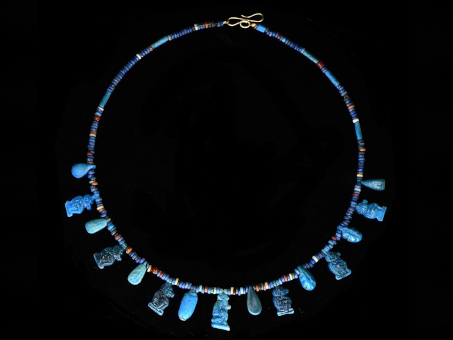 Description:
A magnificent necklace with beautiful colours, strung with blue glazed Egyptian faience amulets and beads, all from the New Kingdom. The amulets depict baboons and fruit and floral amuletic jewellery elements, all flat backed and with a suspension loop at the top, strung together to form a collar characteristic of the 18th Dynasty (compare Andrews, p. 88 and colour plate 65).

Most notable are 7 detailed amulets of a baboon. This animal was worshipped in Egypt as a manifestation of the god Thoth, and was therefore associated with the moon. But it was also related to the rising sun (see below; compare Andrews, p. 90), and therefore played a part in the process of regeneration.

The baboon amulets are interspersed with 8 amulets depicting fruits and parts of plants, lotus (or lily) petals; here too we find the symbolism of regeneration: growing plants symbolized new life, but also some flowers close at night and open again every morning, another indication of new life and resurrection (Andrews. p. 88).

The amulets are combined with faience beads and tubes in the same blue tones to form a very beautiful necklace, which is fitted with a modern 18 carat clasp; the whole is ready to be worn.

Background information:
In the cenotaph of Seti I at Abydos (the Osireion, with parallels on papyri and a block from a temple in Athribis) a scene shows the goddess of the sky, Nut, arching over the earth and supporting herself on her arms and legs. Behind her back lies an area that does not belong to the created, visible world. It is from this place of complete darkness that birds come into the created world, like migratory birds come into Egypt. The accompanying text explains that these animals "have faces like men, but their nature is that of birds. One of them speaks to the other in human speech (...) When they come in Egypt under the rays of heaven, their shapes become birdlike" (Frankfort, Volume I, p. 73; Volume II, pls. 75-76; 81; Von Lieven, p. 76; 408; § 73–75; Zago, p. 517). In other words, in the created world these animals had their usual appearance of birds and made the sounds of birds, but in yonder world their shape was that of a ba-bird, and they made different sounds. When they crossed the boundary between the two worlds, a transformation took place. These creatures were seen as the "ba's of the north".

Similarly, baboons were called "ba's of the east" (Assmann (1983), p. 29; 68). The Egyptians had noticed that baboons began to scream shortly before sunrise, when the eastern sky began to light up a little, signaling the new beginning of life. The animals are the ones "that announce Re when this great god is to be born again (...) They dance for him, they jump for him, they sing for him, they sing praises for him, they should out for him (...) They are those who announce Re in heaven and on earth" (Te Velde, p. 130; Assmann (1983), p. 30). Apart from their natural animal sounds, baboons were thought to speak another, secret language. They were considered to possess hidden knowledge and to be able to converse with the creator god; since they were considered the ideal adorers of the sun god, man hoped to become one of them (Te Velde, p. 129; Book of the Dead, spell 100: "I have joined the baboons and I am one of them"). The pharaoh knew the secret language of the baboons (Assmann (1970), p. 21; Te Velde, p. 133-134), and texts inform us that he also knew their secret form.

Condition:
Restrung as a necklace with a modern 18 carat clasp; all components are intact and in excellent condition overall. The help and advise of a specialist Egyptologist was sought to make sure that all components are from the New Kingdom, rather than a mix of elements that belonged to different periods.