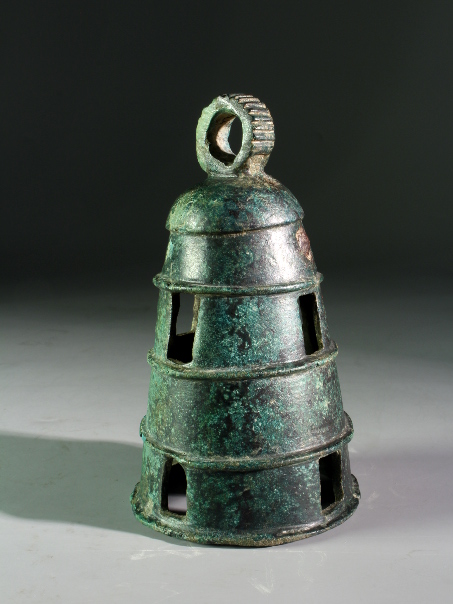 Description:
A bronze bell, conically shaped, consisting of several rings or “registers”, two of which have four rectangular apertures; with a gear-like loop on top.

Bells have frequently been found in the Near East. Sometimes these were used as cult and apotropaic devices (Calmeyer, p. 430-431; Özgen, p. 159). But most of the bells found belong to the category of horse trappings, as pendants on horse collars (Seidl, p. 115, Özgen, p. 159). In Urartu, horses were used to draw chariots and as mounts (Merhav, p. 79), and there is pictorial evidence of bells as horse trappings, provided by Assyrian reliefs and wall-paintings of the eighth-seventh centuries B.C. (see Özgen, p. 159 and p. 181, note 131 with references). Urartu has even been called the homeland of horses’ harness bells, since the earliest securely dated example was found there; besides, its reputation as a horse-breeding country would support the assumption (Özgen, p. 161).

The majority of the horse bells have technological features in common, such as the use of bronze for the body and iron for the clapper rod and clapper itself (Özgen, p. 159; Merhav, p. 80, Seidl p. 115).

Condition:
Intact with only some minor encrustation and surface damage as shown; with a lovely green patina and the iron clapper still preserved inside.