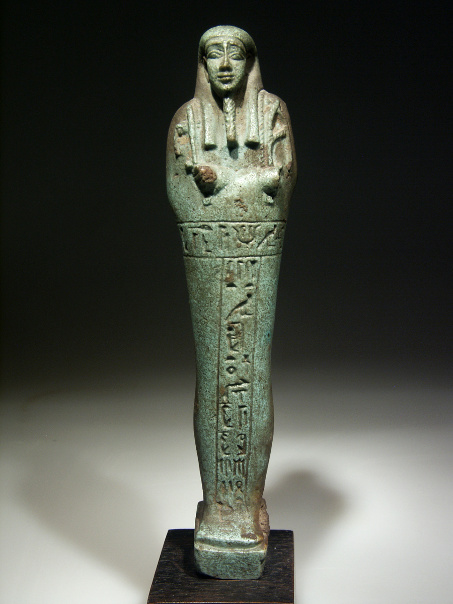 Description:
A large shabti for Nesbanebdjedet, standing on an integral trapezoid base, and holding a hoe and a pick plus the cord of the seed bag hanging over his shoulder. He wears a tripartite wig and has a braided beard.

The T-shaped inscription contains his titles and name: "The illuminated, the Osiris, the imy-khenty (a priestly title), the one who separates the two gods, the priest of Osiris in Anpet, the scribe of the divine ritual (?), the overseer of wab-priests of Sekhmet in Hatmehyt (a part of Mendes), the priest of Banebdjedet, Nesbanebdjedet, born to Shentyt, justified." The dorsal column is uninscribed.

Interestingly, the body of the shabti appears to be a little bit "twisted" when it was put into the mould before firing, as a result of which the inscription is not perfectly vertical. This phenomenon can be observed on several shabtis for Nesbanebdjedet, and therefore tells us something about the process of making and about the maker.

Other shabtis for Nesbanebdjedet can be found in museums in Amsterdam, Brussels, Leiden, London, Rouen, Stockholm and Uppsala, as well as in several private collections.

Background information:
The god Banebdjedet (Ba – or, incorrectly translated, "soul" – of the lord of Djedet – a part of Mendes) is better known as the ram of Mendes. His wife was the fish goddess Hatmehyt (which is also the name of another part of Mendes).

The tomb of Nesbanebdjedet was discovered in 1902 in Tell el-Rub’a in the Egyptian Delta, the site of ancient Mendes; it contained 360 shabtis and fragments of many more; 322 of these have a T-shaped inscription.

Condition:
Intact, some encrustation, staining and discolouration as visible on the photographs; some surface wear and loss of glaze in small spots; mounted on a wooden base.