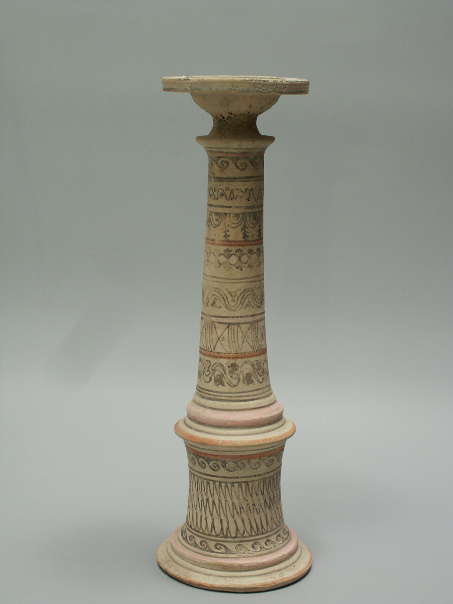 This pottery object was matt-painted, as was customary for Daunian art. The lower part, or base, displays a net-like design of crossing lines between two bands of waves. The upper part has a decoration of seven friezes, the top one containing waves and the others with vegetal and geometric decoration (such as ivy, metopes with saltires (Saint Andrew’s crosses) and ovolo). The bowl is decorated with a rosette surrounded by dots and nets, with metopes with saltires on the rim.

Condition:
Intact. Substantial traces of several colours remaining (among them pink, red and orange); in particular the pink colour lights up when viewed under a black light, but this is not an indication of recent overpainting, all paint is ancient. Cosmetic restoration only to a few minor chips (ca. 5 mm maximum) on the rim of the bowl and on the upper rim of the foot; some encrustation, deposits and unimportant surface wear; a few small sections of the paint slightly faded away, as shown on the photographs. Overall in excellent condition. An impressive piece!