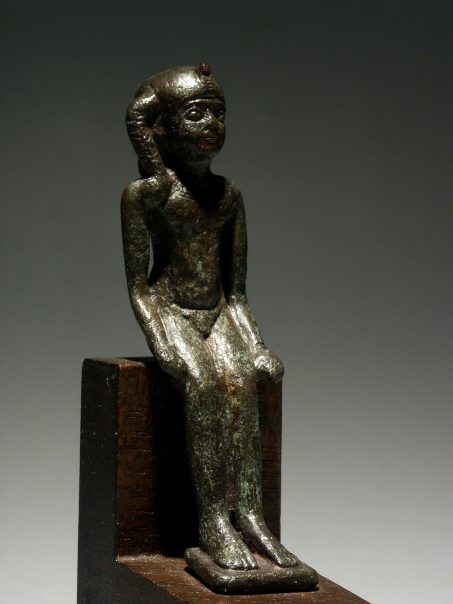 Description:
A bronze statuette of the young god Harpokrates, seated with his hands next to his knees. The god is wearing a skull cap with protective uraeus in front (which is also a reference to his future kingship), the side lock of youth and a beaded collar from which an amulet appears to be hanging on his chest. An elegantly rendered statuette with expressive features.

Harpokrates is the Greek, more familiar name for the Egyptian god Her-pa-khered (Horus the child). With this name several similar but different gods are indicated, such as the personification of the reborn sun, and Horus, the child of Osiris and Isis, also known as Harsiese.

That the Egyptians themselves mixed these gods is not only clear from the fact that they gave them the same name, but can also be seen on magical stelae. Here the child Horus represents the young sun, as opposed to the old sun, represented by Bes. At the same time the child also represents Harsiese, who has overcome dangerous animals like snakes, crocodiles and a gazelle.

Dating:
Late Period; it has been suggested that this statuette may have come from the Kushite Period (25th dynasty), 760 - 656 B.C.

Condition:
Tip of uraeus restored, else intact with an attractive patina; on a modern wooden stand.