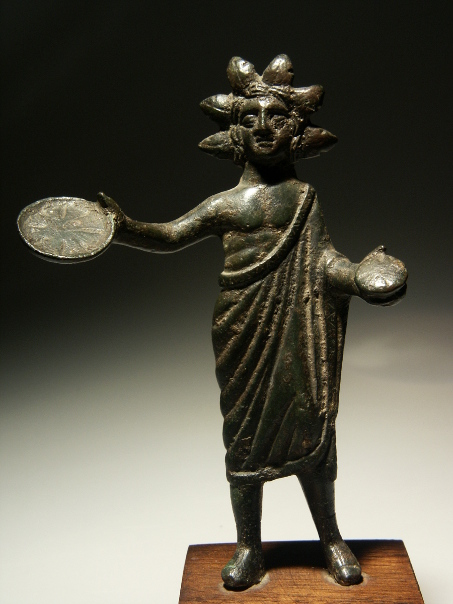 Description:
This lovely bronze statuette from Etruria depicts a male votive figure, probably a priest. He is wearing a himation, which is draped over his left shoulder and arm, and has put his weight slightly on his right leg so that his left leg is relaxed. Sandals are indicated by incisions. In his right hand he has a patera (Greek: phiale; a sacrificial saucer-shaped vessel for pouring a libation to the gods or for receiving a libation), which is decorated by incisions; in his left hand he has a pyxis. His hair is adorned by a diadem, usually referred to as a radiate stephane and interpreted as a wreath of ivy leaves or berries.

The statuette has a flattened form, which is typical of statuettes of offerers, produced in the late fourth and third centuries B.C.; these statuettes, usually in a lineair style, show the male offerer with his chest bare and with a radiate crown (see Warden, Hilprecht Collection, p. 20).

Condition:
Intact, except for two small spots at the proper right knee and right foot that have been restored in a professional way; the object has been cleaned, as is usual with ancient bronze objects.