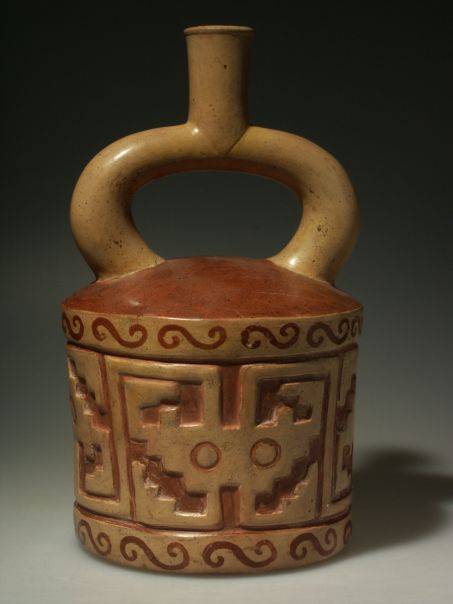 Description:
What a marvellous vessel! On the face of it this polychrome vessel, with its phenomenal use of colours - tan and red contrasting with the buff background - belongs to the group of geometrically decorated pottery. Several motifs occur repeatedly in this group. The most important ones are:

Our vessel shows in S-wave in the top and bottom bands; the middle band, divided into panels, shows what appears to be the step motif, incised and supplemented by circles.

BUT: at the same time we are also dealing with a completely different motif, belonging to the zoomorphic representations. What we are looking at from this point of view is the symbolic representation of the head of a catfish. This animal, a freshwater fish which has a wide and flat head with the eyes on top and long feelers, is frequently portrayed on Moche pottery. Quite often the head alone, seen from above, is depicted and usually this is done by composing it of geometric designs such as the step motif, as in our case. The small circles represent the eyes and the vertical lines that divide the panels are the feelers. What at first sight appeared to be the buff background for the tan geometric decoration now suddenly becomes the foreground. Quite remarkable!

Catfish, living on the muddy bottom of water streams where they cannot easily be seen, were associated with the world of the dead, which was considered as an inverted, nocturnal, underground, or underwater realm (see Hélène Bernier, 2009; see below).

Provenance:
Private Dutch collection, purchased from Artemis Gallery; before that private US collection, acquired before 1970.

Condition:
A few very minor repairs, done professionally and thus invisible; possibly a small amount of overpainting, because under a black light a couple of miniature spots light up a bit here and there, but this is almost impossible to detect, so it is hard to be sure. A few small scratches and a minor rim chip. Otherwise in excellent condition. The vessel appears choice and belongs to the finest pieces of Moche art, also because of the stunning use of colours. An old inventory sticker underneath. Two minuscule holes caused by taking a sample for the TL test.