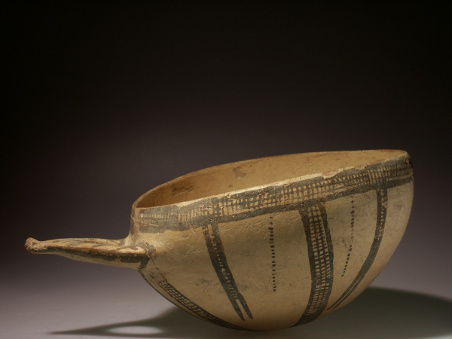 Description:
This is a beautiful and well preserved vessel from ancient Cyprus with an exceptionally good provenance. It is a hemispherical, deep bowl with a bipartite handle, a so-called milk bowl, white slip II ware. The bowl is decorated with dotted and linear patterns with a matt, dark brown varnish, against a cream coloured background, similarly but less elaborate with lines on the handle. Two old inventory numbers (2523 and 1085) were written on the inside with ink.

Condition:
Intact; some wear and miniscule rim chips as visible on the photographs; stable hairline crack at one of the attachments of the handle; the tip of the handle gives the impression to be broken on one of the photograph but I think the shape was intented this way; on the inside a small area with the remains of an adhesive used for a label (only visible when the bowl is inspected in ultraviolet light, not under normal conditions).