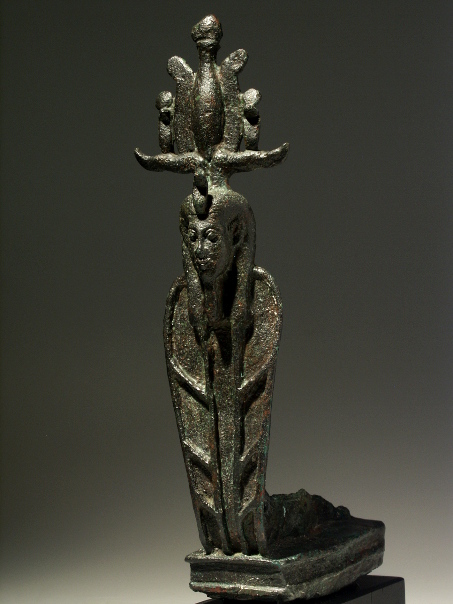 Description:
Here we have a very rare and highly interesting representation in bronze of the Egyptian god Atum in the shape of a human-headed cobra. A small cobra (uraeus, symbol of kingship) is visible on his head. The god is wearing a tripartite wig and a crown with horns, uraei and feathers. On a rectangular basis.

According to the theological tradition of Heliopolis the sun god Atum was the primeval and creator god, coming out of the primeval ocean Nun. But according to spell 175 of the Book of the Dead he did not only create the world but would also destroy it at the end of time (one of the very few eschatological texts from ancient Egypt), after which the world would return to its previous primeval state and would become an inert mass of water once again, in which only Atum and Osiris would remain, turned into snakes.

Condition:
Intact, with a lovely patina; the integral base somewhat roughly shaped, as can be soon on the photographs.