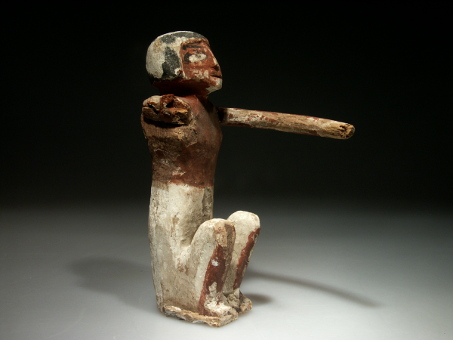 Description:
A representation in wood of a crouching man, his arm(s) stretched out in front in order to row a boat. No doubt he was a member of a larger crew on board of a model boat that was placed in an Egyptian tomb, most probably in the Middle Kingdom or shortly after, ca. 2100 – 1550 B.C.

He is wearing a long white skirt, from his waist down to his feet, with only the front of his lower legs visible because of the position he has taken. His skin is coloured red-brown, and his hair and eyebrows are black. Details of the eyes were added in white and black. His entire body was made of one piece of wood; the separately made arms were attached to the body by means of pegs and possibly once could be moved.

The ancient Egyptians have put model boats in tombs since predynastic times; the first ones were of pottery. Wooden boats appear to have originated in the fourth and fifth dynasties at Saqqara and Gebelein and became more common in the sixth dynasty. However these boats did not yet have a crew; the first one with a crew was found in a sixth dynasty mastaba in Giza. Especially in the Middle Kingdom the custom of adding models of daily life to a tomb flourished. Famous is the tomb of Meketre in Thebes, where 13 boats were found amongst many other models. Also in later periods an Egyptian tried to have at least one model boat (or preferably two) in the tomb equipment, or to have a depiction of boats on the tomb wall.

There were several purposes for this, the emphasis shifting as time passed. Adding models of daily life guaranteed that one could continue one’s normal life after death (including receiving provisions, hence the many scenes involving food). Living the usual life in the hereafter also implied the need for transportation, and since most of this was done on water, a model boat was needed. But every Egyptian also wanted the possibility to make a voyage to sacred places in the country, either during lifetime, at burial or later; especially a pilgrimage to one of the most important cities, Abydos, where Osiris was worshipped, was desired. In fact this soon became an integral part of the funerary rituals. So the everyday need of transportation changed into something on a spiritually much higher level. Since pilgrimages like the Abydos voyage were largely symbolic and ritualistic there was no need for a real boat in the tomb; a model or depiction on the wall would suffice.

Condition:
Proper right arm missing; proper left hand possibly missing, if is has ever been there in the first place (in many cases hands are not separately depicted on similar models); left arm reattached with minor traces of glue visible; some (ancient) damage to the wood with losses of colour, as shown; a hole in the bottom for attachment; traces of glue on the bottom.