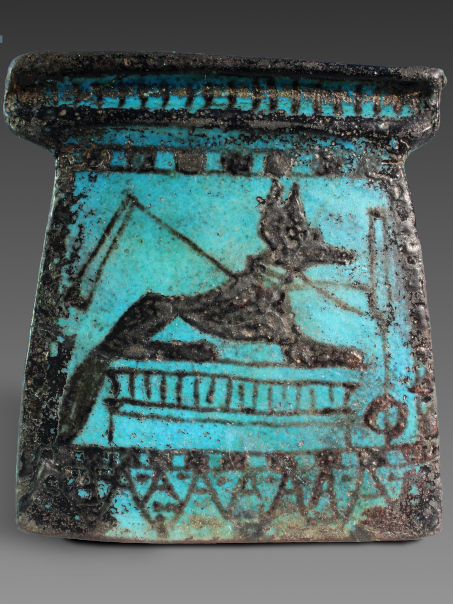 Description:
This is a pectoral of glazed faience with a magnificent blue-green colour and decoration in black. Pectorals were put around the neck of mummies, on the chest, and were usually decorated with images of funerary gods and regeneration symbols, as is the case on this specimen.

Depicted is a jackal, the god Anubis, with a ribbon around his neck, a sceptre of power (sekhem) vertically in front of him, which appears to be resting on a shen-ring (symbol of eternity), and a flagellum behind his head. The jackal is reclining on top of a shrine. Please note that the pectoral itself also has the shape of a shrine. The whole scene is depicted on top a of a stylized frieze of lotus flowers.

The combination of Anubis on his shrine, a ribbon, a sceptre and a flagellum is common in New Kingdom tombs on the west bank of Thebes (see for instance the tomb if Ini-her-khaw, TT299, south-westerly recess of chamber F). For the same without the flagellum: tomb of Nefersekheru (TT296, frieze of north wall of chamber A); with flagellum but without the sceptre: for example the tombs of Pashedu (TT3, entrance to the burial chamber) and Sennedjem (TT1, tympanum of west wall), both in in Deir el-Medina.

A rare item with a beautiful colour remaining.

Condition:
As visible on the photographs parts of the faience show some discoloration (especially along the edges); the lower left corner was broken off and has been professionally rejoined. Comes with an acrylic stand. A wonderful warm colour!