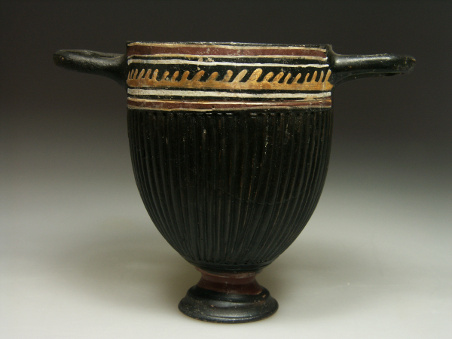 Description:
This is an impressive black-glazed skyphos from the south Italian region of Apulia. The body is vertically ribbed and is standing on a stepped foot. The vessel is decorated with a simple pattern in golden yellow between bands in red-brown and white; the colours were applied on a coat of black varnish.

This decorative technique is typical for pottery which is commonly called Gnathian, after the name of present-day Egnazia (located on the Adriatic coast of Apulia). In the middle of the nineteenth century large quantities of pottery with this type of decoration were found during excavations of the cemeteries of Egnazia (and nearby Fasano). Ever since they were known as the pottery of Egnazia, or Gnathia pottery, even though little of it was in fact made at Egnazia.

For an almost identical skyphos, of which part of the foot is also coloured, see Vienna IV, 1254 (illustrated in fig. 22 of Green 2001 (see literature below).

Condition:
Professionally repaired from original pieces, with no new material. One small horizontal dent on one side (as visible on the photograph) is ancient, this occurred before that skyphos was fired.