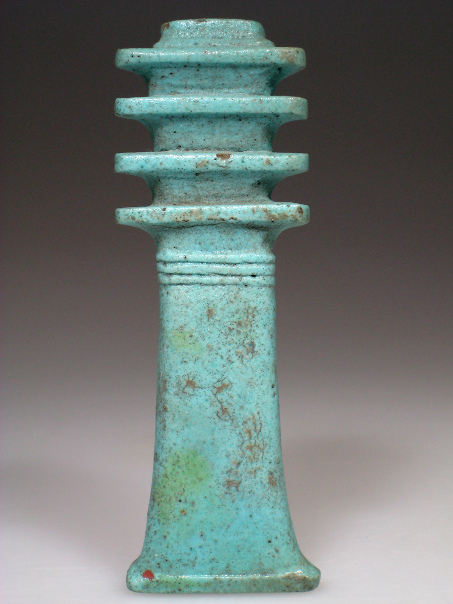 Description:
This is an absolutely huge amulet depicting a djed pillar. Normally these are small, a couple of centimetres on average. Large ones are very rare, but this one is enormous! See the last photograph, where we have put an average sized djed pillar (2.5 cm high) next to the one under discussion (and please note that the smaller one is mounted on a high base, taller than the amulet itself). The pillar being offered here is more than four times as large!

This djed pillar, as usual, consists of a tall shaft which is crossed by four horizontal ribs near the top, with three horizontal lines below, and has a back pillar.

The djed first appeared in the Old Kingdom and soon became one of the most important funerary amulets, intended to give stability to the backbone of the mummy.

There has been some discussion about what the djed depicts, but nowadays it is more or less generally accepted that it is a stylised trunk of a tree with its branches lopped off, although others maintain that it is a sheaf of grain or a bundle of papyrus stalks. Early it was associated with the gods Sokar and Ptah, but later it was adopted by Osiris, to become a stylised representation of his backbone; some rare examples were even provided with the atef crown.

The ancient Egyptian word Dd (djed) indicated endurance, stability, rejuvenation and similar concepts. A text from the Book of the Dead (spell 155) was supposed to be recited over a djed amulet made of gold and placed on the throat of the deceased on the day of the burial; it would make the deceased "a worthy spirit who will be in the realm of the dead on New Year's day like those who are in the suite of Osiris".

However, many of these amulets were found on other parts of the body of mummies, especially on the breast and stomach, and few were of gold. Instead, many of them were made of faience and were either green glazed or blue glazed, these colours being related to regeneration.

But is it really an amulet to be worn or to be placed on a mummy? The enormous size of the pillar and the fact that is was not pierced for suspension, both suggest another purpose: that is was intended for the funerary chamber of a tomb, to be put on top of a so-called magical brick.

According to Book of the Dead spell 151, four magical bricks had to be put against the walls of the funerary chamber in order to protect the tomb and the mummy. Each had a relation to the cardinal points, was inscribed with a spell and had an amulet on it, either a real amulet or a drawing of it (or a combination of both, such as in the tomb of the vizier Amenemhat, TT 82). A brick with an imprint of an amulet on the upper part is also known.

The practice is documented by papyri from the early 18th dynasty onwards and by archaeological evidence in tombs dating from the reign of Thutmosis III onwards. But at present only less than one hundred persons are known to have used the ritual. The most famous case was the tomb of Tutankhamun, where Carter discovered not four but five of these bricks, four of them in niches in the walls of the burial chamber, which were closed with rough splinters of limestone, were plastered over flush with the surfaces of the walls and were then painted over to match the colour decorating the walls.

This probably corresponds to the instruction in spell 151 to cover the bricks (it was done similarly in niches, hidden but not sealed, in the tombs of Amenhotep III and Nefertari). In practice the covering of the brick was also done by wrapping it with linen (as early as the reign of Amenhotep II). According to the spell only the brick with the djed had to be covered, but archaeological evidence shows that the practice was sometimes also applied to the other bricks, and reversely that the djed was sometimes the only amulet that was not covered.

Spell 151 informs us that a blue faience djed-pillar was to be put at the western wall, facing east. Purpose of the amulet was to chase away a malicious creature called Kap-Her ("Hidden of Face") or, in other versions, Neha-Her ("Terrifying of Face").

Condition:
Intact, save for two or three minuscule chips, the most important one (but being only about 2 mm long) on the third rib from above, as visible on the photograph; some discoloration. All in all an absolute beauty!