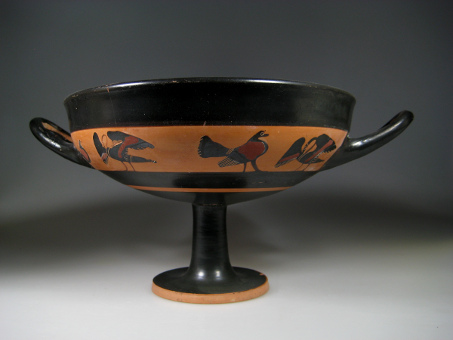 Description:
This is a beautiful black-figure band cup from Athens, dating to the 6th century B.C. and connected to the name of a famous artist.

Band cups are a subcategory of what is commonly known as a kylix, a two-handled drinking cup with a comparatively shallow bowl and a high foot.

The decorative band on this cup shows two pairs of birds on either side, each consisting of a swan and a hen facing each other; white and red paint was added to the birds, as well as a number of incised lines and circles. On the interior the tondo is clay coloured and decorated with a dot and two circles.

This band cup has been attributed to the circle of the Tleson painter (Fellmann).

The Tleson painter was a Greek vase painter who worked in Athens in the third quarter of the sixth century B.C. (circa 555 – 535 B.C.). We also know of a potter called Tleson, the son of the famous Nearchos (one of the most important artists of the previous generation) and the brother of Ergoteles. Both Tlesons may have been the same man, as was suggested by Beazley. Alternatively the real name of the painter is unknown and the modern reference "Tleson painter" is based on the close working relationship with the potter; there is still a scientific debate going on about this matter.

The painter created vases in the black-figure technique and is considered a classical master, one of the greatest of the Little Masters, who were noted for the elegance and fineness of their work. He specialised in small figures of animals with a lot of added color.

Tleson is known from over sixty cups which he signed with his name, and others which were attributed to him on the basis of style. Several lip cups and band cups were decorated by close followers or possibly students in Tleson’s atelier, artists of whom the names are unknown to us.

Often the decoration consists of birds and other animals, or compound creatures (sphinxes, centaurs, sirens). Band cups frequently show these animals arranged in groups of three or four, like on our cup.

There are works of the Tleson painter in several of the major museums (to mention a few, the British Museum London, the Museum of Fine Arts in Boston, the Louvre in Paris, the Ashmolean Museum Oxford, the Agoramuseum and the National Museum in Athens, the Antikensammlung in Berlin, the Musées Royaux des Beaux Arts in Brussels, the Metropolitan Museum of Art in New York, the Ermitage Museum in St. Petersburg and the Museo Gregoriano in Vatican City.

Condition:
There is a hairline stress crack in the wall of the cup (causing a very small area of damage to one of the swans (circa 9 mm x maximum 3 mm), hardly noticeable) and another one in the base of the cup; as usual some scratches and very small spots with some loss of glaze, but these do not detract; a chip on the underside of the base; otherwise intact. Overall an excellent kylix.